Is Javier Hernandez hinting at an exit from Old Trafford?

The Mexican striker will no doubt be getting frustrated as he yet again bides his time on the bench, his cause not helped with the Wayne Rooney/Robin van Persie partnership blossoming at Craven Cottage yesterday, with both men on the scoresheet in a 3-1 victory. Chicarito for his part was an unused substitute.

Hernandez has spent a considerable amount of time on the subs bench since arriving at Old Trafford despite an impressive goalscoring record and was linked with a potential move to Arsenal before the transfer window.

Today he retweeted a Sky Sports story where his fellow countryman Carlos Vela said he thinks his "good friend" Hernandez will think about moving unless he gets more first-team opportunities. 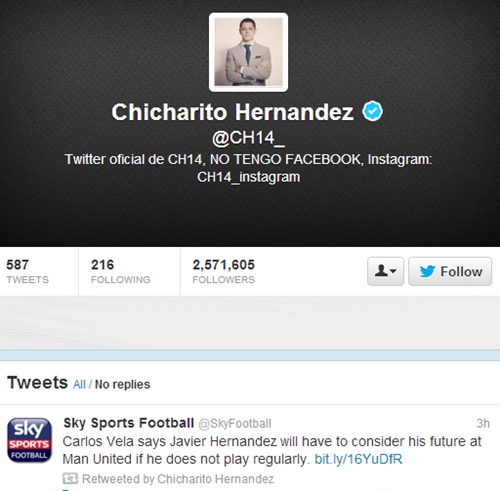 You can’t blame him for getting frustrated and it will only add fuel to the fire that the Mexican will seek a move away from the Red Devils.