13,000 athletes will come together in Kazan, Russia for the 2013 World University Games and among them will be a squad of 20 Irish footballers looking for gold medals.

JOE has decided to lend a hand to one of one the players involved in his fundraising efforts and GMIT student Tom King explains why each of the players has been reliant on raising funds in order to compete in Russia.

“We have to fundraise at least a third ourselves, though Student Support Ireland has been very supportive to the travelling squad,” Tom said.

“It was fantastic that JOE decided to support me, and the team, in our efforts to participate in the World Student Games, a once in a lifetime opportunity for some of us.

The World Student Games will see 16 teams compete in the soccer competition, with four groups of four. All of the teams are guaranteed six games, with the top two from each group going to the semi-finals and the bottom two competing in the play-offs. Ireland have been drawn against Russia, China and Mexico but Tom explains it has been a thorough process to get the squad down to 20.

“Players competing for the Irish colleges and Irish universities this year were chosen in an initial squad of 50, and this has been whittled down. We have been either in training camps or playing matches for the past six weeks and we are definitely becoming more familiar with each other.

“We beat Northern Ireland juniors 3-0 in our last game – we leave on Sunday – so that was a really good performance, and as a right-back, I was very happy with the clean sheet.” 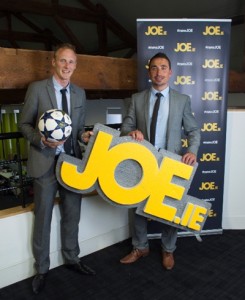 The Castlebar native spent two years with Plymouth Argyle as a youth player under the watchful eye of Ian Holloway and represented Ireland on a number of underage teams, before returning home. He plied his trade at a number of different clubs - the main picture taken during his Galway United days - before deciding to enroll on a Bachelor’s Degree in Marketing in GMIT.

“I went back to college but kept up my involvement with the college team and was lucky to be picked for the Irish college’s side, while I also joined Mervue United, so I kept myself busy.”

Busy would be an understatement. As well as his soccer duties and college work, he is still involved with his GAA club Castlebar Mitchells, and started his new job with JEF Media, an online marketing company in Galway, just last week.

“Yeah, the past few weeks have been busier than normal. I have had GAA training Tuesday and Thursday, Mervue train Monday and Wednesday with a game normally Friday night and then the training camps for the student games are at the weekends. Last weekend Castlebar had championship so I was back down for that, with a good win under the belt.”

We hope that the preparation will pay off for their two and a half week stay in Russia and JOE founder and fellow Castlebar man Niall McGarry, believes that the boys in green deserve all the support they can get.

“JOE is delighted to play a part in sending an Irish team to the World Student Games. The preparation that Tom and his team-mates have undertaken shows how seriously they are taking the competition and we just hope they get their just rewards in Russia”.

We wish Tom and his teammates all the very best in Kazan, with the football tournament getting underway on July 5th.

popular
Family of Ashling Murphy share heartbreaking tribute at Fleadh Cheoil
The JOE Movie Quiz: Week 166
The JOE Friday Pub Quiz: Week 306
QUIZ: Can you score 12/15 in this difficult General Knowledge Quiz?
QUIZ: Test your skills to the limit with this General Knowledge Quiz
One of the best Irish films of recent years is among the movies on TV tonight
Man in his mid-20s dies in two vehicle collision in Cork
You may also like
5 days ago
Sabina Higgins condemns "illegal" Russian invasion of Ukraine following backlash to letter
1 week ago
Clare Daly named on Ukraine security list of people who allegedly promote Russian propaganda
1 week ago
Chess robot grabs and breaks finger of seven-year-old boy after he "violated rules"
1 month ago
Russia leaves Snake Island where guards told warship "go f*** yourself" months ago
1 month ago
WATCH: J.K Rowling tricked by Russians impersonating Zelensky on Zoom call
2 months ago
"Rocky" years ahead for consumer energy prices in wake of Russian oil ban, warns Taoiseach
Next Page