When your Premier League career is just four games in total, one red card, no goals and your replacement up front is Iain Dowie, things aren’t good. Our Forgotten Footballer is Marco Boogers.

Some of our younger readers of JOE may think that Harry Redknapp’s reputation as a ‘wheeler and dealer’ in the transfer market – sorry Harry, it’s true and you know it – has always been there. Well it hasn’t, but it really took off during the mid-90’s while in charge of West Ham.

Players such as Ilie Dumitrescu, Florian Radiciou, Dani, Robbie Slater and Emmanuel Omiyinmi all arrived, and in some cases left, in and around the same time and hardly set Upton Park alight. But one man managed to outshine his under-performing colleagues. One man by the name of Marco Boogers.

Information of Boogers’ career in Holland seems fairly thin on the ground, but he seems to have been a distinctly average journeyman, joining Rotterdam in 1992. He averaged a goal nearly every other game in his 71 games and three years at the club, before the Hammers stumped up £1 million for his services in the summer of 1995.

Redknapp signed Boogers and has admitted he did so without ever seeing the eccentric Dutchman in action. What possessed Harry to sign him we will never know, but we sure are glad he did.

Arriving in London with a tight haircut and hardened features, he looked a little soft in the head. His style of play backed up this perception.

His debut was a home defeat to Leeds, but it was his second appearance, four days later at Old Trafford that was to make him infamous. Boogers was sprung from the bench, but sent-off 15 minutes later for a shocking shin-gashing tackle on Gary Neville. His defence was that the grass was wet and correctly pointed out that the current Sky Sports pundit did in fact finish the match. 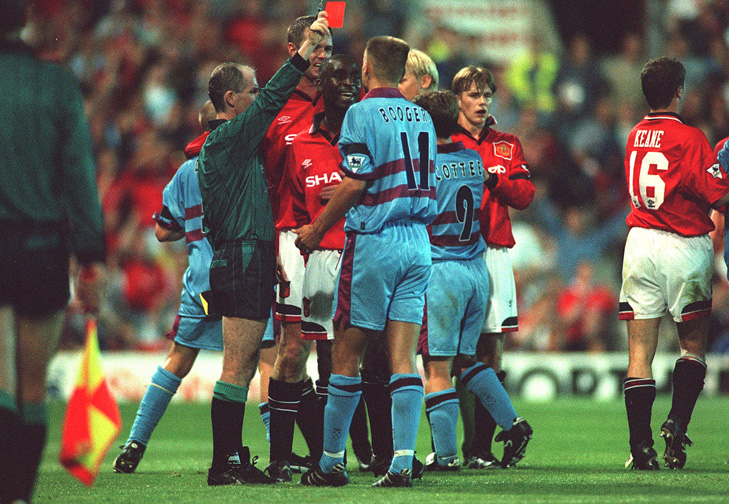 He was banned for four games and went back to his homeland for some R & R, which gave rise to an urban legend that surrounded the player. The Sun claimed that Boogers was staying in a mobile home, going with the understated headline ‘Barmy Boogers Living In a Caravan’. The Guardian correctly reported that this came to pass because the man who looked after West Ham's travel arrangements told a Clubcall reporter that he had not booked any ?ights for Boogers, and that “If he has gone back to Holland, he's probably gone by car again”. The misquote was inevitable and utterly convenient.

‘Barmy Boogers’ did return for two more games, heavy defeats to Aston Villa and Blackburn before Christmas. He had been enduring pain – so had the West Ham fans - in his knee soon after joining, and an MRI scan revealed he needed surgery, which ruled him out for three months, and was allowed return to Holland before Christmas for the birth of his son. And also, we presume, as Harry figured out he couldn’t kick snow off a rope. His West Ham career had lasted four games and a grand total of 95 minutes.

He was loaned to FC Groningen for the remainder of the season, as Harry bought Iain Dowie as a replacement. Have a look at this gem of an own goal Dowie scored against the Hammers in 1996.

At Groningen Boogers did not play a single game due to injury. He was contracted to the Hammers until 1998, though it seems the last time he set foot at Upton Park was in February of 1996. He later turned out for FC Volendam and FC Dordrecht before calling it a day. He later got involved in management in Holland, but will always remembered for his days, all too few of them, in the Premier League.

In 2007, The Times voted him 19th in the 50 worst footballers to ever play in the Premier League. We would imagine that being replaced by Dowie was a bigger dent to the pride than making any list.

popular
Netflix has just added 33 very big movies to its library
The full list of cancelled flights in and out of Dublin Airport on Monday (so far)
QUIZ: Can you guess the crisps from the pixelated packet?
One of the coolest movies of recent years is now available to watch at home
Six people dead after mass shooting at Fourth of July parade in Illinois
QUIZ: It's time for one of our trickiest General Knowledge Quizzes yet
The JOE Movie Quiz: Week 161
You may also like
5 years ago
WATCH: This video showing 'hand-rolled ice cream' in Dublin is mesmerising
5 years ago
There's a new app that helps people find any food, drink or product they're looking for, locally
5 years ago
5 reasons why your business should 'pop-up' at one of Dublin's busiest stations
6 years ago
JOE BUSINESS: 3 great reasons you should pop-up in Dun Laoghaire this summer
6 years ago
This new app will help you keep track of the Luas strikes
6 years ago
TWEETS: Mixed reaction as Joan Burton steps down as leader of the Labour party
Next Page