Twitter’s enfant horrible was at it again this evening…

Nobody should be surprised when Joey Barton goes off on a Twitter rant these days, nor should they be surprised at some of the things he says given some of his utterances on the social networking site in the past. Just ask Didi Hamann.

His latest target was former Manchester United manager Alex Ferguson, at whom he let rip for his consistent attendance at United games, which he (and he isn’t the only one that thinks this way) feels is not helping current boss David Moyes, particularly considering United’s disastrous run of form and the pressure Moyes is under right now.

Typical of Joey, he didn’t hold back when expressing his opinion in a series of tweets, one of which referred to Sir Alex as a busy c**t, a tweet which may subsequently be deleted, in which case we’ve included a screen grab of it below the embedded tweet a little further down the page.

Great win for 5under1and. Man Utd on the ropes at the minute. Feel sorry for Moyes. He inherited a dynasty in decline.

Fergie is there again. Lurking in the shadows like the GrimReaper. I've got a feeling DM gets bullet and he emerges to save the day...

What was the point of him retiring. He's at every game. Go on holiday. Play golf. Spend time with your family. Or friends Busy c*nt #fergie 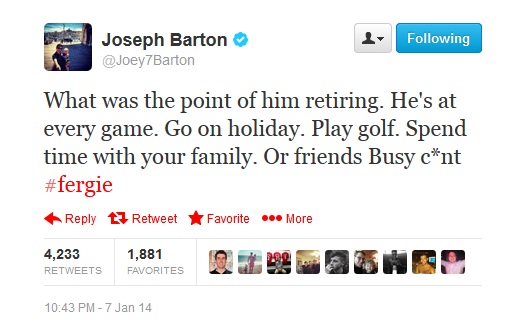 C’mon Joey, it’s about time you started telling us what you really think.

popular
Amazon Prime Video has just added 38 very big movies to its library
Mia Khalifa claims seaside town is better than Miami
The Banshees Of Inisherin is arriving on Disney+ sooner than you might expect
The 50 most iconic songs of all time* have been revealed
U2 drummer Larry Mullen Jr. says band may perform without him in 2023
Woman hit by rollercoaster is trapped in own body after finally awaking from coma
Cruise ship passenger who fell overboard swam with sharks for 20 hours
You may also like
6 months ago
BBC trainee accidentally posts message mocking Man United live on TV
1 year ago
COMPETITION: WIN a copy of Eric Cantona's new Manchester United documentary, The United Way, on DVD
1 year ago
Manchester United documentary written by Eric Cantona available to watch at home in Ireland this May
2 years ago
Marcus Rashford launches book club to help kids experience 'escapism' of reading
2 years ago
Paul Pogba releases powerful statement in response to 'fake news' from The Sun
2 years ago
The JOE Pub Quiz: Week 214
Next Page