Kellogg's have gone a little crazy and created the most 'totes amazeballs' cereal ever. The company produced the breakfast cereal on the whimsical tweet.

Little could Charlatans frontman, Tim Burgess, have guessed he was going to get his wish when he tweeted: "Just invented a breakfast cereal called Totes Amazeballs™... Kellogg's are interested."

How right he was. But, to the ultimate disappointment of hundreds of thousands of totes amazeballs fans around the world, the breakfast munchies will only be available at one music festival. People going to the Tim Peaks Kendal Calling festival will be the lucky ones.

Tim himself is organising a mobile café at the event and will be doling out the cereal which consists of Choco rocks, shortbread, raisins and marshmallows. 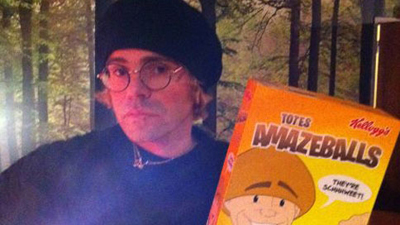 Kellogg's obviously weren't interested at the time of the tweet, but they soon were. Tim told the Machester Evening News: "I heard someone use the expression 'totes amazeballs', and it sounded like something from Charlie and the Chocolate Factory. But within an hour [Kelloggs had] got in touch."

Within a couple of weeks of the tweet, Kellogg's had mocked-up a box for the Totes Amazeballs cereal. The front cover includes a cartoon version of Tim with a speech bubble coming from his mouth saying: "They're schhhweet!".

So pop along to that festival if you're dead set on finding out what Totes Amazeballs actually tastes like.

popular
The new film from the creators of South Park is going to get some big reactions
That Nic Cage film everyone is talking about is finally available to watch at home
Location of winning Lotto jackpot ticket worth €19.06 million confirmed
The JOE Movie Quiz: Week 137
One of Ryan Gosling's best performances is among the movies on TV tonight
Put the pedal to the metal with this General Knowledge Quiz
The JOE Friday Pub Quiz: Week 277
You may also like
5 years ago
WATCH: This video showing 'hand-rolled ice cream' in Dublin is mesmerising
5 years ago
There's a new app that helps people find any food, drink or product they're looking for, locally
5 years ago
5 reasons why your business should 'pop-up' at one of Dublin's busiest stations
5 years ago
JOE BUSINESS: 3 great reasons you should pop-up in Dun Laoghaire this summer
5 years ago
This new app will help you keep track of the Luas strikes
5 years ago
TWEETS: Mixed reaction as Joan Burton steps down as leader of the Labour party
Next Page