Kelly getting stuck into European GAA

It’s nearly two years since former GAA President Sean Kelly was elected to the European Parliament. In that time he’s also served as Honorary President of Belgium GAA. This week he tells JOE about the challenges facing GAA clubs abroad.

The GAA began with a seed of thought, first sown in a room in Hayes Hotel, Thurles in 1884. In the 127 years that have followed, it has flourished, dispersing its roots to every corner of the country. It has even stretched beyond to reach the major landing places of the Irish all over the world; from New York to Sydney and on again.

Sitting in his office in Brussels, Sean Kelly, Fine Gael MEP and former President of the GAA is watching it take an ever stronger grip on Europe.

It’s boom time for GAA on the continent with new clubs popping up at a rapid rate. From Coruna to Stockholm to Tallinn to St. Gallen, Gaelic Games are setting their roots in the ground.

It is not just down to emigration, in a lot of cases it is non-Irish people who have seen the games first hand in Ireland that are bringing the games home to their country. Kelly has been able to observe its development closely in his role as Honorary President of Belgium GAA. 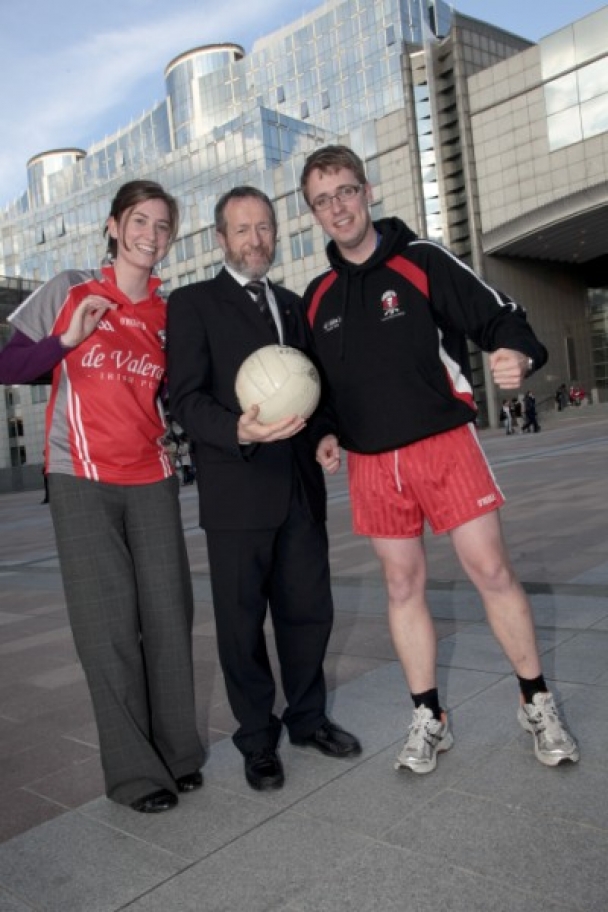 Of course, as President of the Association and through his work with the overseas committee, he has been familiar with the activity in Europe for some time.

“I attended the Annual European Convention in Luxembourg some years ago and was told how hurling in Europe dates back to the 14th century when two legions of the French army played against each other. There were so many Irish enlisted at the time.”

Kelly’s previous involvement was from a distance but now that he is based in Brussels, he has been able to observe things more closely. One thing he says hasn’t changed since he was last involved is the profile of the people: “young, educated, smart Irish”.

Since his return, Kelly has been impressed by what he has seen. “The commitment to the club and the sense of community is just the same (as home) and the rivalry also. Usually in Ireland, your rival will be just down the road whereas here it could be a couple of hundred miles away in Paris or The Hague. I found that particularly enthralling”.

Having hosted and attended the last two Belgium GAA AGMs, he has also admired the way in which the club is run off the field.

“The meetings were more focused than an AGM might be at home, which may be more general. Here there is a great focus on what the club wants to do, very specific. The decision making is almost businesslike.” Belgium is just one example but you will find similar approaches across the clubs of Europe.

Another feature which caught Kelly’s attention was the number of females in attendance; something he feels is an example to clubs at home. “The ladies are far more involved and not just in traditional ways like fundraising, but in all aspects of the club."

When he compares other overseas units to Europe, he sees the main difference to be the transient nature of the people in clubs in Europe. “In England, the US and Canada, people have put down roots and are very settled. They have people involved for 30, 40 or 50 years and it’s passed on to the next generation.”

Belgium is a good example in this regard, as there was a club in Brussels in the 90s but it disappeared, only to be resurrected in 2004.

Still, whether they are in Ireland or abroad, GAA clubs face many of the same challenges; player numbers, funding, fixtures, competition from other codes etc.

However, one challenge which is more unique to the units abroad, especially in places like Europe and Asia, where the history of the games does not stretch so far back, is securing places to train and play games. Where established sports like soccer and rugby can apply for use of public facilities, the lack of international recognition for GAA clubs means their requests often fall on deaf ears.

Recently, Kelly made headlines on various GAA news outlets, calling for the GAA, Ladies Football and Camogie Associations to work together and seek international recognition for Gaelic Games.

Speaking at the Belgium GAA AGM he commented: "As it stands, our games have no international status and therefore no legal status in countries such as Belgium, France or Germany. This means in practical terms that clubs based in these countries can not apply to local authorities for free use of public sports facilities, as our games are not seen as sports per se.”

"The lack of recognition is hobbling the development of our games on the ground. Our clubs in units such as Europe have to go to great expense to hire private pitches, while other sports can access public facilities for free.”

"Therefore I call on the three associations running our games to come together and found an International Federation and affiliate it to the European and International Olympic Committee, the gold standard for recognition of Sports.

His comments were heard around the world and have received support from units in the USA, Great Britain and Europe. According to Kelly, the reaction has been positive, from clubs at least.

The commitment to the club and the sense of community is just the same (as home) and the rivalry also.

“People have been in touch, wondering how it could be done, who would you have to get in touch with and how they can help progress it.”

But what can Kelly do to push this initiative forward, whilst sitting in his Brussels office, far from the rooms where such decisions are made? As far as concrete decisions are concerned, he can’t do a whole lot in the immediate future, but he is undeterred.

Kelly recalls his experience of Rule 42. “Change takes time within the GAA. You must articulate your idea, give people the opportunity to discuss it and let it take root.”

International recognition is more important than ever for the association with so many leaving the country. The GAA abroad can provide a soft landing for those people.

“If you wanted to reach out to the broadest possible community you could do it through the GAA. Getting involved in a GAA club is possibly the best thing a young person emigrating can do in terms of networking, getting jobs etc.”

Securing the future of these clubs is paramount and international recognition will help overcome some of the blocking points. “Many at home don’t realise the sacrifices players abroad make to play the game.

“First of all, most clubs in Europe and Asia don’t have a pitch. They have to go looking for one, pay for it, get goalposts, put them up, and then they have to more or less pay to play and it’s all done by the players themselves. If you could get Gaelic Games recognised, that would free up funding from the local councils and reduce some of the burden.”

Change takes time within the GAA. You must articulate your idea, give people the opportunity to discuss it and let it take root.

Receiving this international recognition would go some way to solving these problems, but it will also open other doors. When Kelly touted the idea of having hurling as a demonstration sport at the 2012 Olympics, he was told that without the recognition, it was a non-runner.

Kelly believes the GAA is missing an opportunity by not being officially recognised abroad. Now he says, “It’s time to take the opportunity”.

With his backing and the growing swell of support amongst the GAA abroad, it will hopefully become a reality in the not too distant future.

Dave writes a regular blog about playing G.A.A. in Europe. You can find it through the following link www.keepingitlit.com.

The Big Reviewski || JOE · The Big Reviewski with Ray Liotta, Goodfellas facts & Tom Hanks making us cry
popular
Netflix has just added arguably the very worst movie of the last decade
EU lorry drivers vow not to help UK get “out of the s**t they created themselves”
Energy supplies in Ireland entering "very tight situation", says Eamon Ryan
Four major employers join forces to create Ireland’s first remote working alliance
Up to 90% of petrol stations in the UK have run dry
Here’s what graduates from Irish colleges can expect to earn in the workplace
Plans for new bank holiday now at an "advanced stage"
You may also like
5 years ago
WATCH: This video showing 'hand-rolled ice cream' in Dublin is mesmerising
5 years ago
There's a new app that helps people find any food, drink or product they're looking for, locally
5 years ago
5 reasons why your business should 'pop-up' at one of Dublin's busiest stations
5 years ago
JOE BUSINESS: 3 great reasons you should pop-up in Dun Laoghaire this summer
5 years ago
This new app will help you keep track of the Luas strikes
5 years ago
TWEETS: Mixed reaction as Joan Burton steps down as leader of the Labour party
Next Page