Luis Figo steps out in the most horrific golf gear imaginable

We've finally found something more dubious than Luis Figo's Just For Men adverts - his sense of 'style' when golfing.

From respected footballer to slightly less respected ex-footballer, it's been quite a journey for former Inter Milan star Luis Figo.

These days, while players hawk a variety of different products (Pele's keepy-uppies now require the use of Viagra, whileBeckham actually think we'll all use Google+), there's probably no more cringe-inducing product placement around than Luis Figo's ability to kick a giant football that's been teleported from a TV, all the while sporting a luscious black coat of Just For Men.

Just when the dubious nature of the advert began causing us to question Figo's sanity, we saw him show up at the Abama Pro-Am Golf Tournament last week, wearing what can only be described as the world's worst pair of pants. 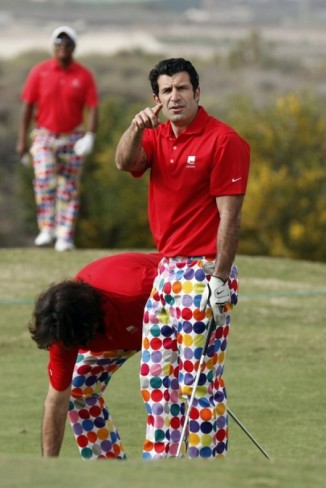 Hey! Stop laughing at my pants!

Most damning of all, Figo was actually outdressed by his former Real Madrid teammate Guti, a metrosexual midfielder who can usually be found wearing something like this.

So what compelled Figo to wear such a ghastly Twister-like pair of pants? Did he accidentally drink his hair dye or take a teleporting TV football to the head at full force?

We had no idea but either way, I think we can all agree that Figo's clown pants for his golf outing were severely below par. Of course we were going to sneak in a golf pun, don't even look surprised...

House of Rugby Ireland · Quinn Roux on finding a home in Ireland and Mike McCarthy brings the absolute HEAT!
popular
Snow and ice warning issued for seven counties
Three men arrested following search of "chop shop" in Meath
Joe Exotic fails to receive pardon from US president Donald Trump
Irish punters could turn €0.98 into hundreds of millions* with a bet on the Super Jackpot
QUIZ: Can you name all the teams in the NBA from their locations?
The 50 most iconic songs of all time* have been revealed
QUIZ: Name all the countries of the EU that contain 2 vowels or less
You may also like
6 years ago
On John O'Shea's birthday, we look back at some of his finest moments
6 years ago
Picture: Top marks if you can name all the footballers in Luis Figo's epic dressing room snap
8 years ago
Video: Luis Figo's spectacular strike for Real Madrid against Man United legends
8 years ago
Irish Soccer's Most Memorable Moments, No 20: Roy Keane's performance against Figo & Co, 2001
4 years ago
This new app will help you keep track of the Luas strikes
4 years ago
TWEETS: Mixed reaction as Joan Burton steps down as leader of the Labour party
Next Page