Yep, you read the headline correctly.

A Bulgarian construction worker has celebrated winning a 15-year long court battle to have his name changed to Manchester United with a massive forehead tattoo of his beloved team's crest. 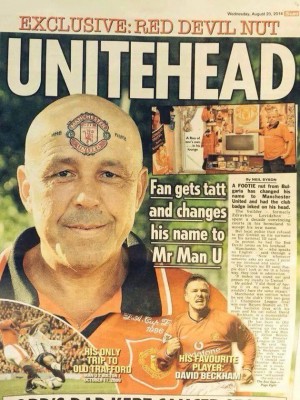 Zdravkov Levidzhov, now 50, decided to change his name in the throes of a hangover, incurred after United's win Champions League Final victory over Bayern Munich in the Nou Camp in 1999.

He spent the last 15 years since that hangover fighting the courts to have his name changed. The courts struck a deal with Levidzhov so that he could not be in breach of copyright. The result: Manchester Zdravkov Levidzhov-United.

popular
Amazon Prime Video has just added 38 very big movies to its library
Mia Khalifa claims seaside town is better than Miami
Ashton Kutcher opens up about rare disease that left him unable to see or walk
The start of the superhero takeover of Hollywood is among the movies on TV tonight
We just got the first trailer for a movie not out until 2024
Matt Lucas quits Great British Bake Off role
Did you spot the explosive detail in the latest episode of The White Lotus?
You may also like
6 months ago
BBC trainee accidentally posts message mocking Man United live on TV
1 year ago
COMPETITION: WIN a copy of Eric Cantona's new Manchester United documentary, The United Way, on DVD
1 year ago
Manchester United documentary written by Eric Cantona available to watch at home in Ireland this May
2 years ago
Marcus Rashford launches book club to help kids experience 'escapism' of reading
2 years ago
Paul Pogba releases powerful statement in response to 'fake news' from The Sun
2 years ago
The JOE Pub Quiz: Week 214
Next Page