They set themselves up for this one, and the fans took full advantage...

There is a sense that Newcastle United's owners are happy enough with the team remaining in mid-table safety. They are too good to go down, but they seem unwilling to spend the money required to push the team into top four contention and even the Cups don't seem that much of an interest, with a fairly weakened side bowing out of the FA Cup on Sunday.

Only Loic Remy, on loan, arrived in the summer and, understandably, fans are unhappy at this state of affairs. So, when the club's official Twitter account tweeted out this message today, supporters piled in.

Personalised newspaper available -see what the headlines would look like if you signed for Newcastle United! http://t.co/EiSqmhMa6m #NUFC 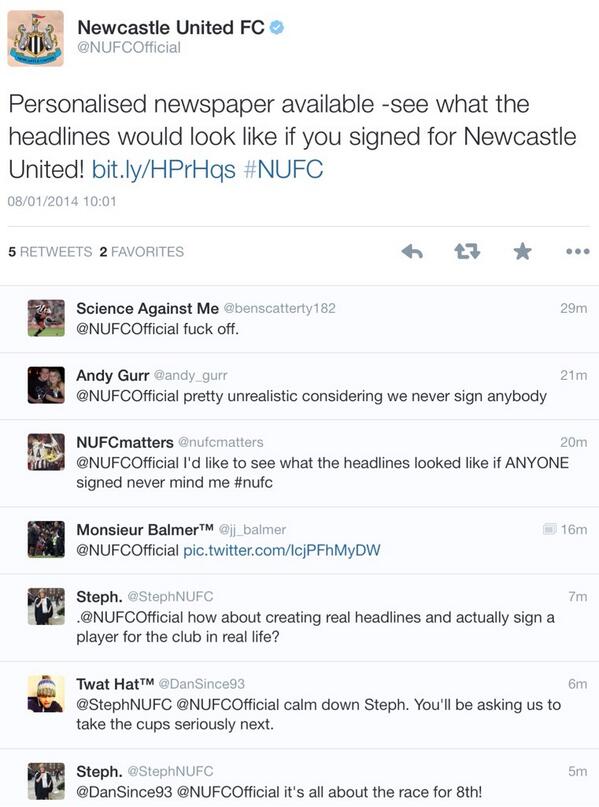 While the first reply might be the funniest, the others are pretty good too.

Thanks to the Times' George Caulkin for the above screen grab

popular
QUIZ: Can you name all the counties in Ireland without the letter 'A'?
The JOE Friday Pub Quiz: Week 301
County where winning Lotto jackpot ticket worth over €5.5 million was sold confirmed
Jordan Peterson suspended from Twitter over Elliot Page comment, says he won't apologise
An underappreciated sci-fi blockbuster is among the movies on TV tonight
Parent's Benefit Leave in Ireland is being extended from today - here's what you need to know
Electric Ireland announces second major price hike in recent months
You may also like
1 week ago
The Chase star Bradley Walsh can't control his laughter after the most NSFW answer ever
2 weeks ago
WATCH: Lightyear star reveals who'd win in a fight between him and Thanos
2 weeks ago
30 years on, The Simpsons writer confesses he misunderstood iconic joke
4 months ago
30 years ago, Arnie's biggest prank ended with Stallone's biggest flop
5 months ago
China gives Fight Club a new ending, manages to completely change the plot of the movie
7 months ago
Who tweeted it: Simu Liu or Rahul Kohli?
Next Page