With it being his birthday today, we thought we'd take a look at the interesting career of Aston Villa manager Paul Lambert.

Most people will know Lambert more recently for his exploits in management, having done a fantastic job with Norwich before moving to Aston Villa last season and keeping them up despite having an incredibly young and inexperienced squad.

However, his career as a professional player took a very interesting path in which he moved from Scotland to the Bundesliga, joining Borussia Dortmund before all the cool kids liked them way back in the 1990s. Perhaps it could be said that he is the original football hipster...

Lambert started off, however, playing for St. Mirren, and although he had been born in Glasgow, he moved to Renfrewshire, closer to Paisley where The Saints play their football. He joined their youth academy, and at just 17-years-old won his first medal in 1987 as they claimed the Scottish Cup. As it turns out, this was to be the last time that a team composed entirely of Scottish players would win the cup.

From there, he moved to Motherwell, and came close to winning the league when the team finished second under Alex McLeish in the 1994-95 season, but it did qualify them to get in to the UEFA Cup, a competition in which he was spotted by the Bundesliga side he was later to join, Borussia Dortmund. They played away in the first leg of their clash against Die Schwarzgelben, and only lost by one goal, but Lambert had impressed Ottmar Hitzfeld enough that the German brought him in as a triallist when his deal at Motherwell ran out at the end of that season.

Certainly very few British-based players move abroad, so Lambert's sojourn to Germany was not only an unexpected move, but one that he would claim later helped his formation as a manager, and he even admitted that he cried when he was leaving. The club clearly holds both a special place in his heart, and an even more special place in his footballing career. 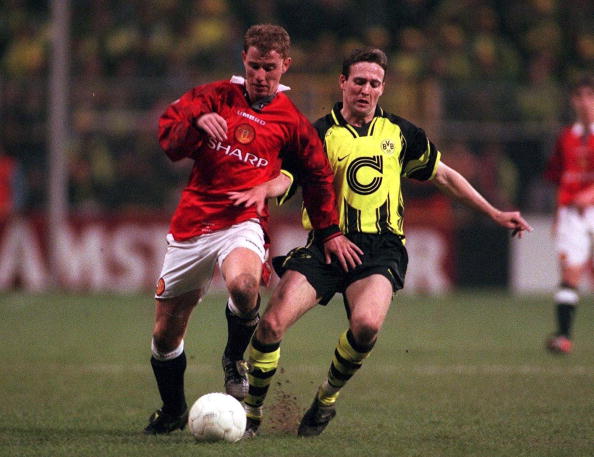 Speaking to The Guardian, he remembers the moment where he thought he wouldn't make it, looking at all the talent they had in their squad when he looked around him:

“I remember thinking: 'No. You're never going to do it.' There was unbelievable self-doubt, that I couldn't handle that company because when I saw the players ... He'd won Serie A, someone had won the World Cup, someone had won the European Championship, the Bundesliga titles ... and I'm coming from Motherwell on a free transfer. I was worth a bottle of Coke.”

However, he managed to turn that around, and ended up man of the match in their European Cup final against Juventus, marking Zinedine Zidane and keeping him relatively quiet all night.

Lambert had decided that he wanted to leave Motherwell at the end of the 1995 season, and they, for their part, had thought that he would end up not signing on with them, scouting around for another club, and coming back with his tail between his legs.

However, as a free agent, a representative in Holland went out and found him two clubs who were willing to trial him with just a few days left before pre-season started: PSV Eindhoven and Dortmund. He ended up in Germany despite playing well (but also being moved out of position) for PSV, and the rest, as they say is history.

Lambert left again to join Celtic in 1997, but he had achieved an incredible amount in his short time on the European continent, and etched himself in to the lore of Dortmund, whose fans really took to him during his time there. Back in Scotland, he joined Celtic, and jumped straight into the thick of things with a debut against Rangers. Later on that season, in another match against their Glasgow rivals, he scored this absolute belter, which will be remembered fondly by any Hoops fan.

At Celtic, he picked up even more medals, including four SPL titles and two Scottish Cups.

All in all, Lambert's career as a player was one that took a few interesting twists and turns, and his gambles were rewarded with massive success. So far, he has been similarly successful in management, and the project he has at Aston Villa at the moment is one that we will all be watching with interest this coming season to see if his focus on youth can pay off with a finish high up the table.

popular
The JOE Friday Pub Quiz: Week 324
The "eighth best movie ever made" is among the movies on TV tonight
Irish woman selected for first civilian mission around the Moon
New country-wide weather warnings issued as temperatures set to drop to -6 this weekend
Mia Khalifa claims seaside town is better than Miami
15 years ago, one of the greatest scenes of the 21st century arrived in cinemas
Jennifer Lawrence sparks controversy by saying she was the first woman to lead an action movie
You may also like
3 years ago
Congratulations issued to Liverpool on behalf of Seán Cox
3 years ago
'Liverpool are probably going to sell Divock Origi in the summer and that's the right thing to do'
3 years ago
COMPETITION: Win 4 tickets to our sold-out UEFA Champions League Final event
3 years ago
Join John Arne Riise in Dublin for the ultimate UEFA Champions League Final event
3 years ago
[CLOSED]COMPETITION: Win tickets to a UEFA Champions League game next season
3 years ago
Brian Kerr's reaction to Spurs' last minute winner against Ajax is absolutely brilliant
Next Page