One Irish Senator is in court... because her jacuzzi is too big

The Fine Gael Senator Fidelma Healy Eames is in court today over a dispute she's having with a plumber claiming that the jacuzzi he installed was 'too big'. Sounds like a contender for the #firstworldproblems meme.

Ms Healy Eames was in the news recently after she received a €100 fine for boarding a train without a ticket. Thankfully for her that PR nightmare was all sorted out earlier this week when she dropped her appeal, but she’s back in the news once again.

This time round a plumber has taken Ms Healy Eames and her husband to court because apparently they only paid €13,000 of an agreed €28,840 for work done on the couple’s bathroom. Well, a jacuzzi to be more precise.

The hot tub that had been chosen by Ms Healy Eames for her en-suite subsequently did not fit the allocated space, which had already been plumbed. That led to this wonerful headline in the Irish Daily Mail this morning: 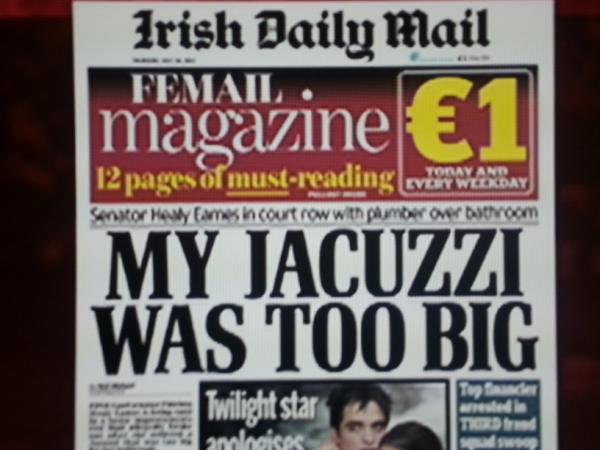 The plumber in question, Michael Allen, says that he was told where to put the hot tub by an interior designer, however, the space was originally designed to be a walk in wardrobe and there was no way of fitting the tub in without more work. So their hot tub was too big for their walk-in wardrobe… and they’re still complaining?

Mr Allen wants to receive the cash he’s owed for the work he completed. The case continues today so that two more witnesses can give evidence on behalf of Ms Healy Eames and her husband.

popular
Woman killed in Clare crash named as Peggy Twomey, mother of Marty Morrissey
Man in his 70s dies following two vehicle collision in Galway
These are the most generous counties in Ireland, according to GoFundMe
Schools and third level institutions to remain closed in counties affected by orange or red weather warnings
Amazon Prime Video has quietly added 8 big new movies to its library
A fun action flick with Nicolas Cage is among the movies on TV tonight
Every child in Direct Provision will get a Christmas present this year following fundraiser
You may also like
5 years ago
WATCH: This video showing 'hand-rolled ice cream' in Dublin is mesmerising
5 years ago
There's a new app that helps people find any food, drink or product they're looking for, locally
5 years ago
5 reasons why your business should 'pop-up' at one of Dublin's busiest stations
5 years ago
JOE BUSINESS: 3 great reasons you should pop-up in Dun Laoghaire this summer
5 years ago
This new app will help you keep track of the Luas strikes
5 years ago
TWEETS: Mixed reaction as Joan Burton steps down as leader of the Labour party
Next Page