While most of us experience the Monday morning blues, Newcastle United manager Alan Pardew has more than good reason this morning to be in a downbeat mode.

We were more than a little surprised when Joe Kinnear was back on Tyneside after Mike Ashley announced he was to become the club’s first ever Director of Football. To us that title simply means meddling in team affairs, setting the transfer agenda and undermining the manager, but maybe we are a little cynical.

Kinnear has said that he will be in charge of the comings and goings, so there could be a halt to the French legion coming to St. James’ Park. Already Darren Bent has been linked (The Daily Star)– they love their number nines in that part of the world don’t you know – while Yohan Cabaye seems to be longing for a return to France, with Monaco an interested party.

Even though he was awarded a 47 year contract by the board, Pardew’s time in the hotseat is set to come under increasing pressure from the man who left the game four years ago because of a heart condition. Daily Mirror correspondent Simon Bird will also presumably be looking forward to Kinnear’s return. In one of his first press conferences as Newcastle temporary manager in 2008, he called Bird a ‘cu**’ and swore 52 times during a tirade against the media. Good luck Pardew!

The rumours surrounding Pepe Reina and Luis Suarez leaving Anfield are gathering pace. The Times say that a £10 million move for Simon Mignolet should be completed this week – potentially good news also for Kieren Westwood – while Luis Suarez has again made comments alluding to his future elsewhere. Lost in translation his agent will no doubt argue. 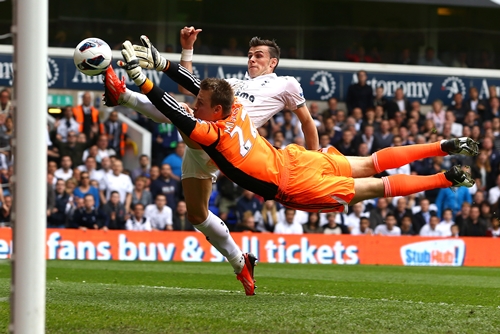 Manuel Pellegrini is admitting defeat in his pursuit of Robert Lewandowski according to The Sun. “Hey, Sun reporter, I’m giving up on Lewandowski as it is a non-runner” is a quote we would like to have heard first hand.

PSG are looking for a double raid on White Hart Lane if you believe everything you read. The Daily Mail suggest that AVB is being courted by the mega-rich French club, with Carlo Ancelotti to be finally granted permission to speak to Real Madrid.

And if that wasn’t bad enough for Spurs fans – some may argue it isn’t a bad thing at all – The Daily Mirror claim that they will make a huge offer to Gareth Bale to snatch him from under the noses of Madrid, Bayern, United or whatever team is looking to tempt the Welshman away from Norf Landan.

Elsewhere Nani says he may not leave Old Trafford  (The Daily Mail), Laurent Kosciely is considering his future amid speculation linking him to many of the top European clubs while Andy Carroll looks set to undergo his medical at Upton Park this week.

popular
Netflix has just added 12 very big movies to their library
5 years ago, Hollywood took a massive gamble on a huge sequel... and lost big time
One of the most underrated crime thrillers of recent years is among the movies on TV tonight
‘Older’ woman who took Prince Harry’s virginity gives her side of the story
Keanu Reeves goes for two classic pub grub dishes on surprise UK visit
QUIZ: JOE's Big News Of The Day Quiz #40
Netflix backtracks on anti-password sharing measures following user outcry
You may also like
2 months ago
Will Ferrell is looking for someone to put him and his mum up in Liverpool
5 months ago
Nine-year-old girl shot dead in Liverpool
8 months ago
Merseyside police defend ‘exemplary’ Liverpool fans tear gassed by French police
1 year ago
Police issue warning over CCTV footage of Liverpool bomb explosion
1 year ago
Liverpool bomb declared a terrorist attack as police confirm fourth arrest
1 year ago
Liverpool bomb: Taxi driver "locked bomber inside car" after spotting explosives (Report)
Next Page