England manager Roy Hodgson named his 23 man squad for the World Cup yesterday and obviously a number of players were left disappointed. One of them was West Ham's Andy Carroll.

The Geordie battering ram has been named on the standby list in case one of the chosen strikers pick up an injury and big Andy is patiently waiting for the call in Dubai where he's on holiday with his girlfriend Billi Mucklow.

Billi is a fan of a selfie as you can see on her Instagram page and she snapped one of herself and Carroll with a caption 'There's no place I'd rather be'... but check out Andy's response at the bottom of the picture... 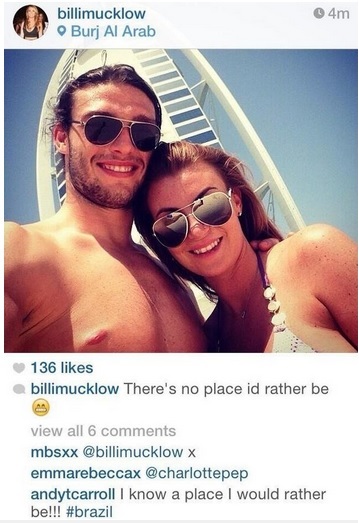 Carroll would obviously like to be going to Brazil with the England squad but his record of two goals in 15 games this season isn't exactly the form that would displace any of the four strikers on the plane; Wayne Rooney, Daniel Sturridge, Danny Welbeck or Rickie Lambert.

popular
The JOE Friday Pub Quiz: Week 314
Johnny Depp/Amber Heard trial movie unveils first trailer and it's not good
Jeffrey Dahmer’s dad thinks he knows what’s to blame for son becoming a serial killer
Community movie finally confirmed – though some major cast members are missing
An Oscar-winning war thriller is among the movies on TV tonight
“Megaproject” MetroLink takes next step towards construction
GIF: Gruesome leg injury from the NFL last night
You may also like
1 year ago
Ireland set to be part of potential 2030 World Cup bid
3 years ago
QUIZ: How well do you remember the 2018 World Cup?
3 years ago
England World Cup-winning goalkeeper Gordon Banks has died, aged 81
3 years ago
England's World Cup win over Sweden led to record levels of alcohol poisoning
3 years ago
Netflix has added a must-see documentary series on the World Cup
3 years ago
FIFA to propose a new annual Club World Cup
Next Page