With alcohol advertising banned in Kazakhstan, Celtic will be wearing a one-off shirt for tonight's match against Shakhter Karagandy.

There is no let up to the football now the season has kicked off and today sees the first games in the final Champions League qualifying round.

That means a long trip to Kazakhstan for Celtic where they will play Shakhter Karagandy. The game did throw up a small dilemma for the Bhoys as Kazakhstan doesn’t allow alcohol advertising, meaning their new Magners logo-branded shirt can’t be used.

So C & C, the company behind Magners, are using the game to advertise another of their brands, Tipperary Irish Mineral Water. It means that tonight's shirt will be a real one-off and as it features an Irish name on the front, will be highly prized if any ever come onto the market. 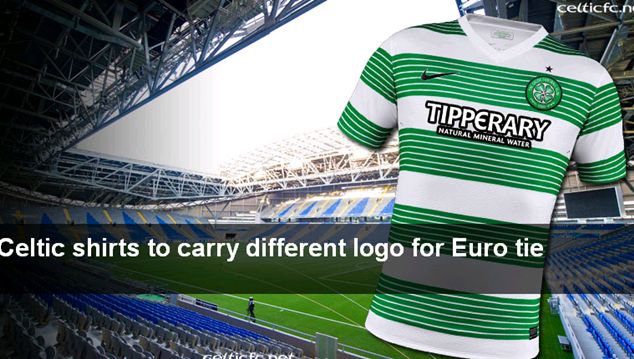 This is the image that Celtic have put up on their site of the jersey. Whether the real thing looks like this remains to be seen but with the game kicking off at 4pm, we'll soon know.

The Big Reviewski || JOE · The Big Reviewski with Andy Serkis, Squid Game follow-ups & the return of Succession
popular
Nigel Farage has been saying republican phrases again, but in reality, he's the one laughing
How to lower your cholesterol - 5 really handy tips
Largest aircraft in the world touches down at Shannon Airport
Facebook looks set to change its name as part of rebrand
Skeletal remains of six people found under Cork pub
An underrated Denzel Washington thriller is among the movies on TV tonight
The 100 greatest TV shows of the 21st century have been revealed
You may also like
1 month ago
Woman in her 60s dies following collision with truck in Tipperary
2 months ago
Young girl in critical condition following car crash in Tipperary on Friday night
3 months ago
Gardaí ask public not to share footage as man aged in his 80s dies after crash in Tipperary
6 months ago
Three-year-old girl dies after being struck by a bus in Tipperary
9 months ago
A man in his 80s has died following a crash in Tipperary
11 months ago
Man arrested after breaking into church and stealing candles in Tipperary
Next Page