Pic: Did you see the brilliant Luis Suarez banner in the crowd at Anfield last night?

Luis Suarez has been feted loudly and often by Liverpool fans this season, but he was the subject of something of an unusual tribute in Anfield last night.

Suarez maintained what has been an unbelievable run of form this season during Liverpool’s 4-0 drubbing of city rivals Everton last night, setting up Steven Gerrard for the opening goal before slotting home Liverpool’s fourth goal in the second half.

While his name was sung loudly from the stands, one group of home fans paid tribute to his peerless ability to make fools out of defenders by knocking it through their legs with one of the most unusual, if inspired, banners you’ll ever see at a football match. 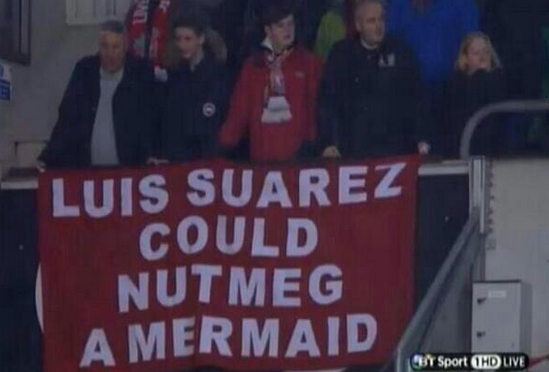 We’re not sure if Luis’ grasp of the English language is good enough to understand the exact meaning of the message, but we’re sure he appreciated the sentiment nonetheless.

popular
One of the best movies of the decade has just been added to Netflix
Cristiano Ronaldo 'agrees £173m-a-year deal' with Saudi club
The latest Star Wars episode is directly based on an IRA funeral
Country singer Jake Flint, 37, dies in his sleep just hours after his wedding
20 years ago, one of the best sci-fi movies of the 21st century was a box-office bomb
Katherine Ryan says famous TV star is a ‘predator’ and everyone in industry knows
Surprise frontrunner emerges as potential next James Bond as producers 'love him'
You may also like
1 week ago
Will Ferrell is looking for someone to put him and his mum up in Liverpool
3 months ago
Nine-year-old girl shot dead in Liverpool
6 months ago
Merseyside police defend ‘exemplary’ Liverpool fans tear gassed by French police
1 year ago
Police issue warning over CCTV footage of Liverpool bomb explosion
1 year ago
Liverpool bomb declared a terrorist attack as police confirm fourth arrest
1 year ago
Liverpool bomb: Taxi driver "locked bomber inside car" after spotting explosives (Report)
Next Page