So it’s probably not as bad as another tattoo with shoddy spelling you might have seen on the site today, but it certainly gives it a run for its money.

There have been so many examples of terrible football-related tattoos – some of them worn by footballers themselves – that it’s hard to pick out one in particular as the worst but surely this effort in homage to Liverpool defender Kolo Toure must be close. 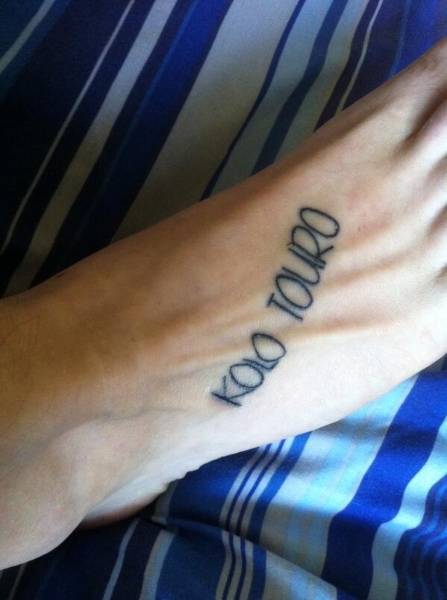 Where to start? Well, first of all, quite obviously, it’s spelled wrong. Secondly, it looks as if it’s written in biro across the guy’s foot and thirdly, there is no attempt at creativity or artistic endeavour whatsoever. None.

According to the lads at 101 Great Goals, the guy who got the tattoo was drunk when he got it which explains an awful lot but if you’re looking to pay a proper tribute to a new Liverpool fan favourite, this is how you do it…

popular
The JOE Friday Pub Quiz: Week 308
Infant dies after being hit by jeep in Roscommon
Pilots fly over destination airport at 37,000 feet because they were both sleeping
Netflix has just added 23 very big movies to its library
Two Irish people arrested in "smuggling event" near Miami
One of 2022’s best hidden-gem comedy series is available to stream
Here's how to make €9-11 on Revolut in just a few minutes
You may also like
2 months ago
Merseyside police defend ‘exemplary’ Liverpool fans tear gassed by French police
9 months ago
Police issue warning over CCTV footage of Liverpool bomb explosion
9 months ago
Liverpool bomb declared a terrorist attack as police confirm fourth arrest
9 months ago
Liverpool bomb: Taxi driver "locked bomber inside car" after spotting explosives (Report)
1 year ago
Gini Wijnaldum shares his favourite gym exercises for building abs of steel
1 year ago
Armed police close gym near Liverpool after owner refused to shut doors
Next Page