This picture may shock some.

With the Toffees leading 1-0 thanks to a Steven Naismith goal, the Costa Rican wideman went down after conceding a free-kick against Simon Hislop 30 yards from his own goal.

Oviedo immediately signalled for attention, and he was treated for around five minutes on the pitch - with surrounding players visibly in shock - before being taken straight to hospital in an ambulance. 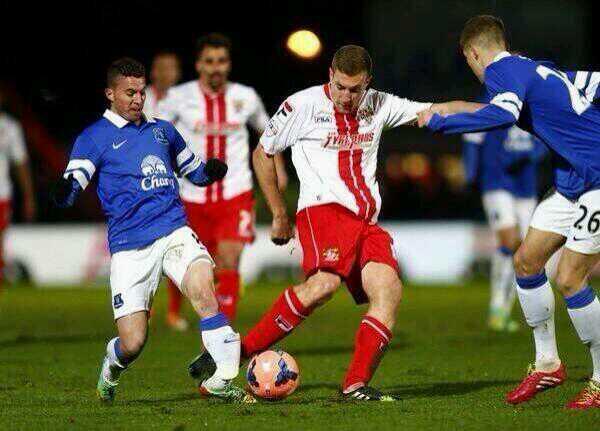 Everton went on to win the game, thanks to further strikes from Naismith, Johnny Heitinga and Magaye Gueye.

JOE wishes the 23-year-old Oviedo all the best, and hopes he can resume his career as soon as possible.

The Big Reviewski || JOE · The Big Reviewski with Andy Serkis, Squid Game follow-ups & the return of Succession
popular
Largest aircraft in the world touches down at Shannon Airport
Facebook looks set to change its name as part of rebrand
How to lower your cholesterol - 5 really handy tips
Skeletal remains of six people found under Cork pub
An underrated Denzel Washington thriller is among the movies on TV tonight
The 100 greatest TV shows of the 21st century have been revealed
Claire Byrne was having absolutely none of Nigel Farage's claims on Monday night
You may also like
9 months ago
Everton v Man City tonight postponed due to coronavirus outbreak
2 years ago
QUIZ: Test your knowledge of the Merseyside derby
2 years ago
COMPETITION: Win €1,000 cash plus two tickets to Everton v Liverpool
2 years ago
The Football Spin on the great anti-Liverpool conspiracy and how far does it really go?
2 years ago
WATCH: Young Irish Everton fan goes to see his first game and has the time of his life
2 years ago
The Football Spin on Jordan Pickford’s crossbar challenge, Ireland's road to Euro 2020 glory and Mourinho’s long march to the Old Trafford exit
Next Page