Video: Fabricio Coloccini sent off last night with this chokehold

The rumours are that Fabricio Coloccini is getting frustrated with life at Newcastle, and frustrated is one way of describing the defender last night after getting a red card on pre-season.

Speculation has been rife since even before the end of last season that the Argentinian wants to move back to his homeland and he might suggest it could go some way to explaining his outburst last night.

Or it could be just simply down to the fact that according the manager Alan Pardew, the referee lost control of the game in Portugal against Pacos Ferreira.

Either way, it was the type of chokehold that any WWE wrestler would be proud of, with the facial expressions of Pacos player Rui Caetan merely adding to the moment. 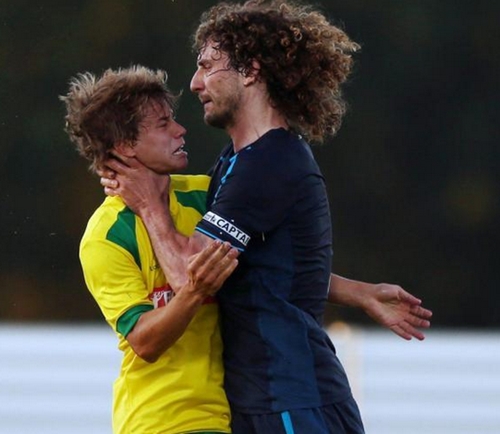 popular
James May reportedly hospitalised after crashing into wall at 75mph filming new show
Disney+ has just added 10 big movies to its library
Netflix has just added an incredibly tense 97-minute thriller
QUIZ: You'll need to be razor-sharp to get 100% in this General Knowledge Quiz
An exciting Irish crime thriller is among the movies on TV tonight
The JOE Music Quiz: Week 117
The JOE Friday Pub Quiz: Week 307
You may also like
2 years ago
The Coca-Cola Premier League roadshow is coming to Galway this weekend
3 years ago
The Football Spin on the Rafa Benitez conundrum, Chelsea's chance for glory and how English football anticipated Brexit
4 years ago
Irish international Ciaran Clark knocked unconscious in Magaluf bar attack (Report)
5 years ago
We really hope Michael Owen's tweet about Jurgen Klopp was meant ironically
6 years ago
10 of the worst ever signings in the January transfer window
6 years ago
TWEETS: Players, pundits and fans unite to pay tribute to Pavel Srnicek
Next Page