You have to hand it to RTE, the football punditry never fails to entertain. And tonight it was something as simple as a caption.

Darragh Maloney was joined in Montrose tonight by Johnny Giles and Richie Sadlier to pore over a comprehensive Arsenal victory against Fenerbahce, though many were hoping to see Eamon Dunphy and Liam Brady in studio in case the Gunners had another bad night at the office.

Sadlier is considered one of the most honest and insightful pundits on these shores, with a vast knowledge stemming from his own playing days. He is after all a full Irish international who enjoyed a successful career at Millwall as a striker before injury prematurely ended his career.

But for RTE, his crowning moment came a few years earlier. 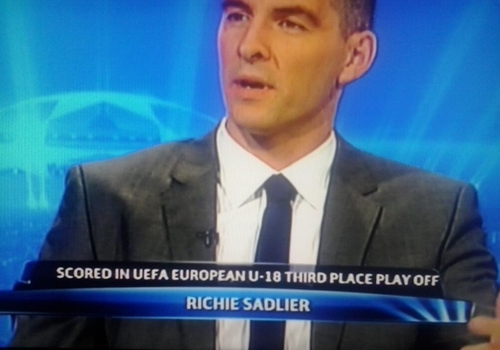 Former Ireland international or ex-Millwall striker would have just been too easy.

Hat-tip to Liam Foley for sending this in.

popular
Varadkar: "There are two things we have to do... one is to bring wages up"
Galway named one of the top 10 best European cities to raise a family
BBC trainee accidentally posts message mocking Man United live on TV
Second doctor accused of sexually assaulting patients at hospital in Kildare
Bruce Springsteen announces two nights in RDS in 2023
Irish employment law experts warn employers must find ways for staff to take entitled leave
World's fastest passenger jet to take to the skies in 2025
You may also like
22 hours ago
RTÉ's new show is looking for the best takeaway in all of Ireland
1 week ago
Conversations With Friends tackles sexuality the way Normal People tackled sex
4 weeks ago
Sinn Féin leader Mary Lou McDonald launches legal action against RTÉ
1 month ago
"Fit as a fiddle" – Charlie Bird's wife Claire praises her husband after his great climb
1 month ago
Eamon Ryan to propose shorter showers and less driving to curb energy costs
1 month ago
Viewers in shock after 'psychopath test' on Tommy Tiernan show
Next Page