Republic of Ireland defender Darren O’Dea joined Ukranian side Metalurh Donetsk at the end of last week, but they still are under the impression the centre-half is a Scot.

The 26 year-old centre-half joined the club on a three year deal after two years in Toronto, where he claimed he never wanted to leave in the first place.

Donetsk will now become O’Dea’s sixth club in three years and as well as his nationality; the club profile could do with a little bit of editing. Though Reading and Ipswich would only be too pleased to see that the Ukranian outfit are under the impression both clubs were described as being in the English top-flight for the 2009/10 and 2010/11 seasons respectively. 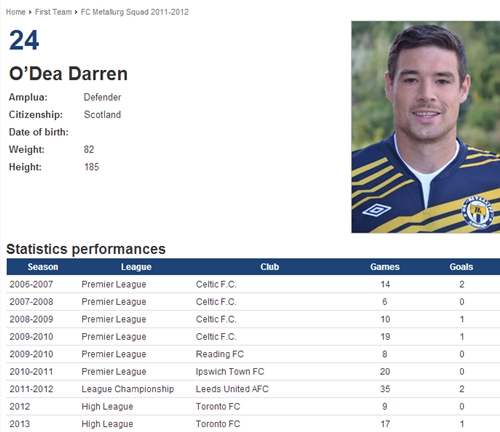 Metalurh Donetsk finished fifth in last season's Ukrainian league and will compete in the Europa League, coming in at the third qualifying stage.

The Big Reviewski || JOE · The Big Reviewski with Y: The Last Man, that Malignant ending & a secret streaming service
popular
One of the most-anticipated movies of the last few years is finally available to watch at home this week
The 50 most iconic songs of all time* have been revealed
It looks like Garth Brooks will play FIVE nights in Ireland after all
PICS: The man with the biggest penis in the world has one unbelievable problem with it
Government announces special €1,860 payment for laid-off workers during pandemic
Gardaí warn of scam involving "inappropriate or sexual images" after young boy blackmailed for money
Simon Harris and wife welcome arrival of new baby boy
You may also like
7 years ago
Vine: Scottish fan goes absolutely nuts celebrating Suarez' second goal with Uruguay fans in Brazil
8 years ago
So the New York Times thought Andy Murray was English
5 years ago
WATCH: This video showing 'hand-rolled ice cream' in Dublin is mesmerising
5 years ago
There's a new app that helps people find any food, drink or product they're looking for, locally
5 years ago
5 reasons why your business should 'pop-up' at one of Dublin's busiest stations
5 years ago
JOE BUSINESS: 3 great reasons you should pop-up in Dun Laoghaire this summer
Next Page