Pic: Great shot of the goal that got the Kilkenny U21s back on track tonight

It looked for a long time that the Offaly Under 21s were going to beat Kilkenny at Tullamore. Then Michael Brennan struck.

While we kept one eye on reigning champion Roger Federer exit Wimbledon at a shockingly early stage, the other was trained on O’Connor Park as Offaly were really putting it up to Kilkenny in the Leinster U21 hurling championship.

The Faithful got off to the faster start and they led at half-time, 0-9 to 0-8. The expected second-half fightback never materialised and an Offaly goal had the home side up by two points with just 10 minutes to go.

Then Kilkenny managed to work their way towards the Offaly net and Michael Brennan, from a very tight angle, drilled the ball over Conor Clancy in the Offaly goal. 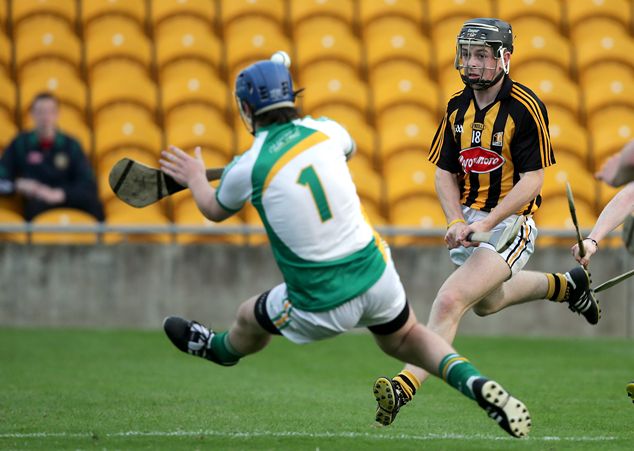 That goal put Kilkenny in front and after Offaly saw a penalty saved twice just minutes later, the tide had turned for good. In the end the Cats won by six, 1-19 to 1-19 but they have that Brennan goal to thanks for swinging the momentum.

In the other semi-final Wexford saw off Dublin’s conquerors Carlow 1-12 to 0-9 to set up a final between the Model County and the Cats.

And in Munster Limerick beat Tipperary in the Minor championship, 1-17 to 0-17.

The Big Reviewski || JOE · The Big Reviewski with Andy Serkis, Squid Game follow-ups & the return of Succession
popular
The JOE Friday Pub Quiz: Week 265
Ryanair is seeking applicants for "the worst job in Ireland"
Here's the line-up for this week's episode of The Late Late Show
National Lottery reveals 28 locations where tickets worth over €35,000 each were sold
Ed Norton's superb debut performance is among the movies on TV tonight
The 50 most iconic songs of all time* have been revealed
Unusual summer temperatures are on their way this weekend
You may also like
5 days ago
Wicklow GAA to investigate fight after Under 15 match on Saturday
1 year ago
Post-match celebrations and a lack of social distancing at certain events put club game on hold
1 year ago
Cork GAA pleads with clubs and supporters “not to engage in celebrations that breach current guidelines”
1 year ago
What's the Bronco test and why it may come up in conversation this week
1 year ago
The Andy Moran GAA Isolation Workout
1 year ago
SuperValu, Centra and the GAA team up on initiative to support elderly people
Next Page