Pic: Home and Away star the latest to join the ‘Mayo for Sam’ bandwagon

According to the most recent census results (2011) the population of Mayo is 130,552. And on the evidence of what we have seen over the last week or so, every last one of them is currently somewhere in the world trying to get the message across that this is the year Mayo win the All-Ireland.

It is now 62 years since Sam made the trip to Mayo and the locals are determined to leave no stone unturned to make the rest of the world aware that this year is different.

Over the last few days we have seen the ‘Mayo4Sam’ message pop up at the Tour de France, a Bruce Springsteen concert and at the Darts.

Now Mike Kelly has been in touch to tell us that his friend Carolyn Hennigan nabbed Home and Away Star Shane Withington (John Palmer) in Sydney and made him clamber aboard the already overloaded Mayo bandwagon. 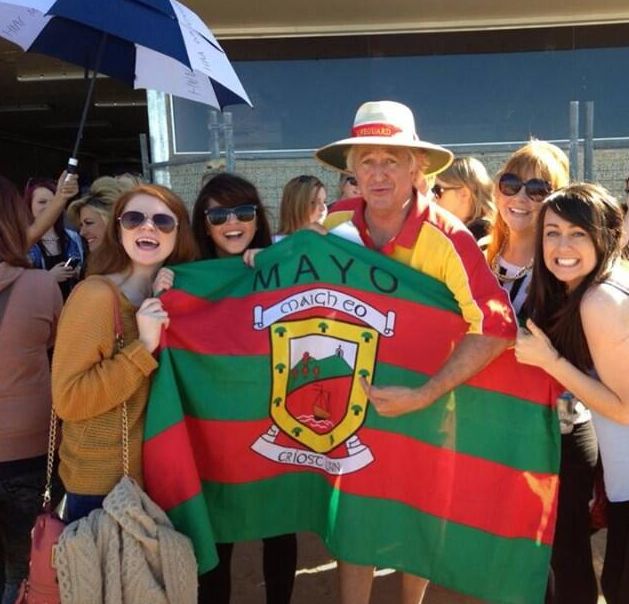 It was only last week that we featured the soap star displaying his love of Munster rugby, so we know he has an affinity for Irish sport.

We don’t know who will win the quarter-final next Sunday, but Mayo are definitely winning the PR war so far.

popular
The Last Of Us Episode Five will premiere days earlier in Ireland and UK
5 years ago, Hollywood took a massive gamble on a huge sequel... and lost big time
One of the most underrated crime thrillers of recent years is among the movies on TV tonight
Shock as blues singer beats Adele, Beyonce and Taylor Swift to win Song of the Year Grammy
Amazon Prime Video has just added 21 big movies to its library
Ben Affleck's bored expression at the Grammys becomes a meme
The first reviews for Hogwarts Legacy are absolutely stellar
You may also like
3 months ago
Brendan Óg Duffy's father speaks powerfully about his son's death
3 months ago
Gardaí investigating alleged assault on under-9 GAA player at children's sports event
5 months ago
Roscommon GAA confirms investigation into alleged assault on referee during juvenile game
6 months ago
Looking for a hotel room for the All-Ireland Final weekends? It won't come cheap...
7 months ago
Taoiseach condemns "disturbing" fight at Galway v Armagh game
8 months ago
The 2 Johnnies share unbelievable catfish ordeal affecting over 40 people
Next Page