Pic: Irish man in Toronto gets baseball star to pose with Kerry jersey

After a tough start to his week, Jose Reyes’ is now being targeted for an appearance as a Kerry footballer.

If the name Jose Reyes rings a bell it might be because you saw the video we posted earlier this week when he was nailed right in the man zone by a baseball. The thoughts and prayers of every man in JOE Towers went out to the Toronto Blue Jays man.

So we are very pleased to report that he has recovered and appears to be in great form, if this picture from JOE reader Robert Wallace is anything to go by.

Robert, a Lixnaw native now living in Toronto, attended a Blue Jays game on Wednesday night with his girlfriend, who happened to be wearing a Kerry hoodie.

Robert managed to get Reyes’ attention and took this snap of one of the best players in the Major Leagues with the famous Kerry crest. 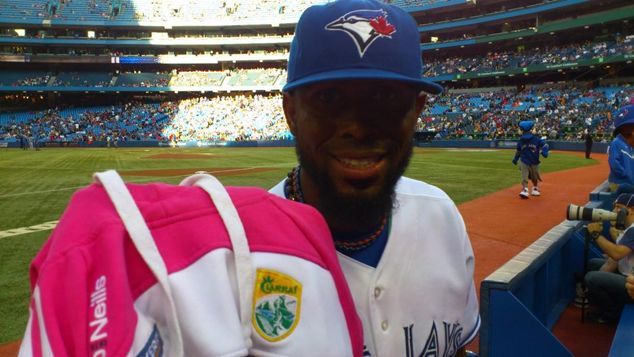 We can now add baseball to the NFL, the Masters,  the World Snooker Championship and the Canadian Grand Prix as sporting events where Kerry GAA clothing has popped up.

Robert reckons he can get Reyes to tog out for the Kingdom next year but with a salary of $10million, that might just push the limits of the Kerry County Board.

popular
The JOE Movie Quiz: Week 80
QUIZ: Can you guess these European countries from their outlines?
QUIZ: How well do you know Elf?
Donald Trump paid $3 million for recount that uncovered more Biden votes
The JOE Movie Quiz: Week 79
The JOE Music Quiz: Week 35
Gardaí search suspected shebeen in Kerry
You may also like
1 month ago
Post-match celebrations and a lack of social distancing at certain events put club game on hold
1 month ago
Cork GAA pleads with clubs and supporters “not to engage in celebrations that breach current guidelines”
5 months ago
What's the Bronco test and why it may come up in conversation this week
7 months ago
The Andy Moran GAA Isolation Workout
8 months ago
SuperValu, Centra and the GAA team up on initiative to support elderly people
8 months ago
Meath GAA club confirm adult player has tested positive for coronavirus
Next Page