Pic: One disgruntled anonymous Manchester United fan went and got a ‘Moyes Out’ tattoo on his back

Come on lads, own up, which one of you got this?

Unless you’ve been living under a rock for the last 36 hours or so, you’ll have realised that David Moyes is in the middle of what is probably his toughest week as Manchester United manager following a disastrous 2-0 defeat to Olympiacos on Tuesday night.

There have been no shortage of United fans calling for Moyes to get the boot, but so passionately does one Red feel about that particular cause that he felt the need to get the words ‘Moyes Out’ tattooed on his back. 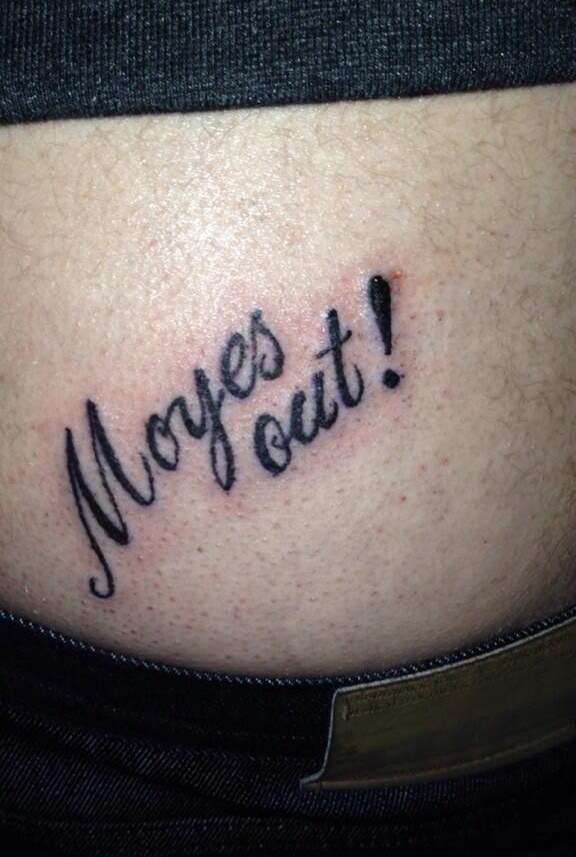 The picture surfaced on Twitter yesterday and the person who got the tattoo has so far remained anonymous, but if it happens to be any JOE readers out there, feel free to get in touch and we’d be more than happy to give you a public medium to explain just what drove you to go so far. Don’t be shy now.

We should point out that it’s pretty much a lose/lose situation for the anonymous person in question as if Moyes does get the sack then the tattoo will quickly become irrelevant and if he does manage to turn things around at Old Trafford, then somebody with a ‘Moyes Out’ tattoo will look just a little bit silly… as if they didn’t already, of course.

The Big Reviewski || JOE · The Big Reviewski with Dune, a mini-Hangover reunion & the best of Timothée Chalamet
popular
Alec Baldwin fatally shoots woman with prop gun on movie set
HBO announces a new Sopranos series is in the works... kind of
CONFIRMED: Nightclubs to open at 100% capacity, 11.30pm curfew has been removed
QUIZ: Can you name all the countries beginning with L?
Two Gardaí assaulted during protest in Dublin City Centre
Here's the lineup for this week's Late Late Show
"It’s obvious these guidelines were issued by Government without any meaningful consultation with the hospitality sector."
You may also like
5 months ago
COMPETITION: WIN a copy of Eric Cantona's new Manchester United documentary, The United Way, on DVD
6 months ago
Manchester United documentary written by Eric Cantona available to watch at home in Ireland this May
11 months ago
Marcus Rashford launches book club to help kids experience 'escapism' of reading
11 months ago
Paul Pogba releases powerful statement in response to 'fake news' from The Sun
11 months ago
The JOE Pub Quiz: Week 214
1 year ago
Harry Maguire gives his version of events in Mykonos in TV interview
Next Page