One youngster in a Galway primary school is showing his/her support for the embattled Galatasaray manager.

The former Manchester City boss has not had the best of starts in the hotbed that is Turkish football, winning just four games from his first eight in charge, including a derby defeat that never goes down well with the locals.

While it seems harsh that his position is already under threat, one schoolkid either has inside information from Galatasaray that he is to get the boot, or more likely is that the kid is blissfully unaware that he is back in the game after his spell at the Etihad. Either way, the message is clear. 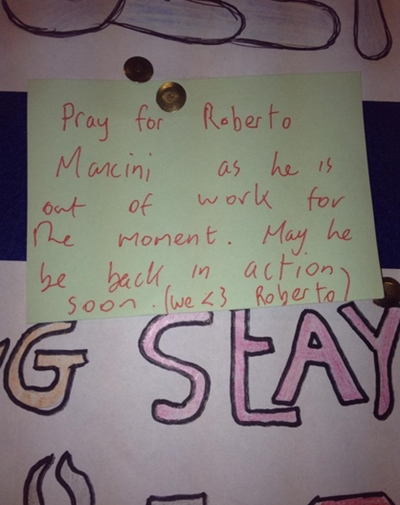 The picture was posted within the classroom in a Galway school today which was kindly forwarded onto us by one of the teachers.

We’re sure he’d appreciate all the support he can get.

popular
Gardener and broadcaster Dermot O'Neill has died aged 58
Jordan Peterson suspended from Twitter over Elliot Page comment, says he won't apologise
County where winning Lotto jackpot ticket worth over €5.5 million was sold confirmed
The JOE Friday Pub Quiz: Week 301
QUIZ: How well do you know your Irish history?
Landlords must give longer eviction notice periods under newly passed legislation
The most inexplicable prequel of all time has just arrived
You may also like
5 days ago
Taoiseach condemns "disturbing" fight at Galway v Armagh game
2 weeks ago
Drogheda and Galway inner city named as worst places in Ireland for litter
3 weeks ago
Woman in her 80s dies after falling from building in Galway
1 month ago
Galway named one of the top 10 best European cities to raise a family
1 month ago
Met Éireann issue warning for potato blight this week
1 month ago
NUI Galway temporarily restricts services following cyberattack
Next Page