Pic: Phil Jones showing the battle scars from the win over Arsenal

While many expected it to be a tough encounter between the two rivals, on international duty today the former Blackburn man was showing just physical it was after his clash of heads with Wojciech Szczesny at Old Trafford. Though to be fair it was partly of his own doing.

It looks nasty enough, but Jones probably isn't a million miles away from his next bruising challenge and is rearing to go for England's games with Chile and Germany. 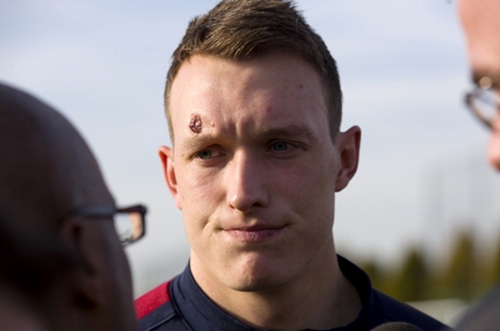 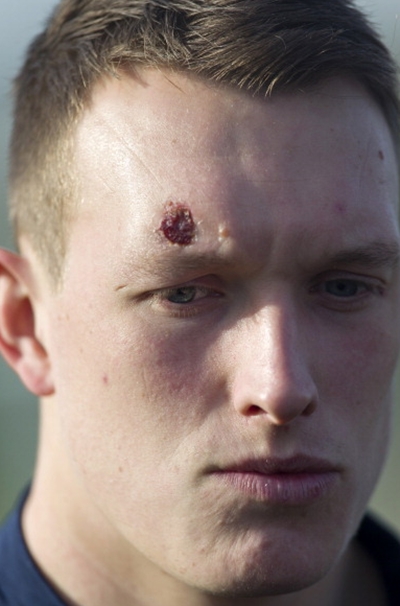 His own team-mate Wayne Rooney can vouch for the fact that Jones is no stranger to putting himself about, so he is either courageous and committed, or reckless and possibly headless, depending on your viewpoint.

popular
Netflix has just added an incredibly tense 97-minute thriller
Nearly 100 flights delayed at Dublin Airport on Monday
18 counties hit with weather warning as temperatures set to reach 29 degrees
A county-by-county breakdown of the average rent in Ireland as rent inflation reaches record high
WhatsApp introduces way to choose who can and can't see you're online
QUIZ: Can you get top marks in this short but tricky Irish geography quiz?
Xbox testing new subscription plan in Ireland this month
You may also like
2 years ago
In an uncertain world, David Luiz provides the reassurance we all need
2 years ago
Arsenal manager Mikel Arteta tests positive for Covid-19
3 years ago
Arsenal ambassador and Bollywood actress apologises for racist remarks made towards Alex Iwobi
3 years ago
The Football Spin featuring Mourinho’s resilience, Liverpool’s desperate chase and the Ada Hegerberg effect
3 years ago
WATCH: Matteo Guendouzi celebrates with Arsenal fans after North London derby win
3 years ago
Arsene Wenger has finally explained the infamous trouble he has with zips
Next Page