The lovely Rachel Riley was given a surprise when Ryan Giggs showed up on her 1000th episode on Countdown.

The self-confessed Man Utd fan was clearly pleased to see her United hero show up during recording, though with his chequered past, her husband of four years may have been a little more nervous than Rachel herself.

It struck us as a little odd that he would present her with a jersey with 86 – the year of her birth – rather than having 1000, but whatever floats their boat.

“I had no inkling that I had just filmed my 1,000th episode when Nick announced it on the show, and I was touched that the Countdown team had surprised me with the news,” she told reporters.

“But I nearly fell through the floor when Ryan Giggs suddenly appeared. As a lifelong red, I’ve watched Giggsy rack up 1,000-plus appearances since I was five, so there couldn’t have been a more special way to celebrate mine.” 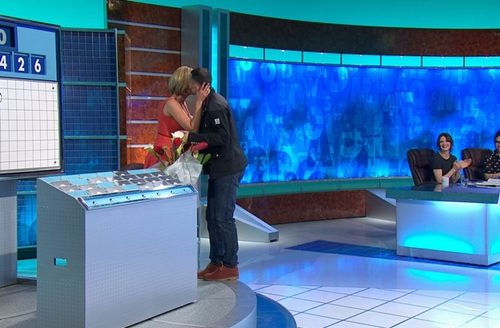 It was win-win all round as Rachel looked delighted with her present while Giggs looked pretty pleased to be in the company of the glamorous presenter.