Seventeen years of Arsène Wenger captured in one infographic

Arsène Wenger took charge at Arsenal seventeen years ago today and the club have released this infographic to highlight his time in charge.

He had to wait almost two weeks for his first game, a 2-0 win over Blackburn Rovers, but few would argue he has transformed the club and also changed the culture of English football ever since.

In that time he has overseen Arsenal claim three Premier League titles, four FA Cups and a move from Highbury to the Emirates. Not to mention of course unearthing quality young players through an extensive scouting network and instilling a certain playing philosophy that has contributed to the improvement of the standing of the English game.

The club have been rightly proclaiming the many achievements of the Frenchman today and while he himself is probably more focused on the Champions League encounter with Napoli, his longevity is a testament to what he has achieved since pitching up in London in 1996.

Here are his seventeen years captured in one infographic.

Seventeen years of Wenger... in one #Arsenal graphic #AW17 pic.twitter.com/kXYpaiNz58 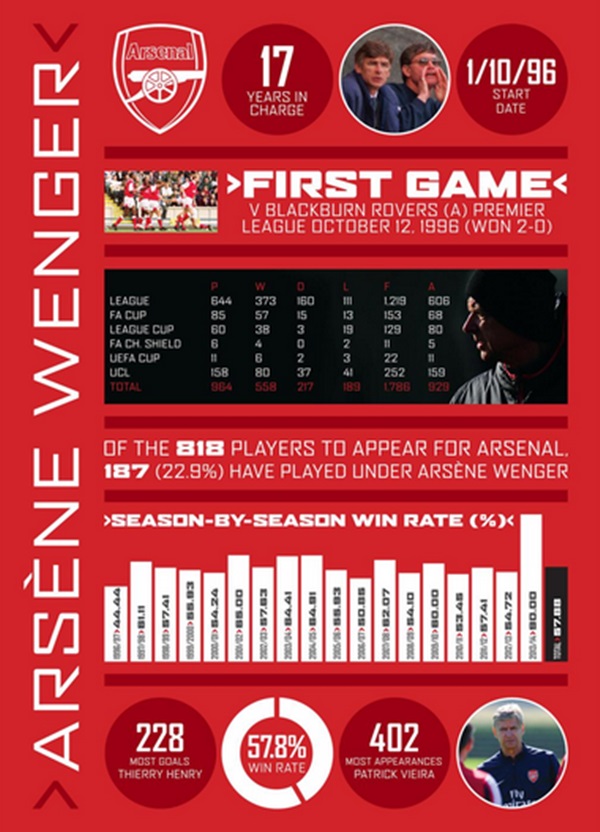 Not too shabby at all after such a long period in charge.

popular
Netflix has just added 33 very big movies to its library
The long-awaited MetroLink is finally happening, for real this time, honest
The full list of cancelled flights in and out of Dublin Airport on Monday (so far)
Waterford man sentenced to three months imprisonment for operating "cruel and illegal" puppy farm
Irish man rescued after he went missing for three nights in New York swamp
QUIZ: Can you guess the crisps from the pixelated packet?
REVIEW: Thor Love and Thunder is equal parts fun and blunder
You may also like
1 year ago
Arsene Wenger tells Graham Norton about his infamous fight with José Mourinho
3 years ago
Arsene Wenger has finally explained the infamous trouble he has with zips
5 years ago
Everyone is making the same joke about Enda Kenny and Arsene Wenger on Twitter
5 years ago
Arsenal supporter shares footage of 'fucking classless' fans booing Wenger during charity game
6 years ago
Two Arsenals at war: 10 things Gunners can't stop arguing about
6 years ago
Arsene Wenger gives cryptic response to questions on managerial future
Next Page