Son of an All-Ireland winning footballer and a keen GAA follower, Shane Lowry was a special guest on Championship Matters, who were keen to point out he’s a tasty golfer.

The 2009 Irish Open champion will look to claim a second victory when the tournament gets underway at Carton House in two weeks and the 26 year-old has shown some impressive patches of form, most notably claiming the Portuguese Open late last year and defeating Rory McIlroy at the World Matchplay this year.

We all know that he has incredible talent, but tonight as a guest on Championship Matters alongside Marty Morrissey, we were left in no doubt that not only is the Offaly man an impressive performer globally, he rules the roost locally too. Obviously. 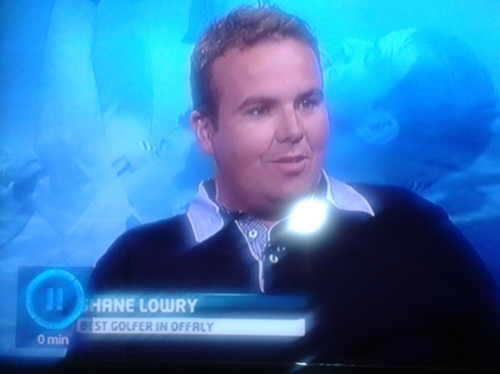 Of course his father Brendan was part of the 1982 winning side that prevented  a Kerry side winning a fifth title on the trot, so his GAA pedigree is not in doubt.

To all you golfers in the Faithful County, it could be a while before Shane relinquishes his most prestigious title.

Hat-tip to Kevin Hinds on Twitter for sending this our way.

popular
WhatsApp to punish users unless they agree to new privacy changes in coming weeks
Tánaiste Leo Varadkar hits out at ad about antigen testing
The JOE Movie Quiz: Week 101
RSA confirm online theory tests to come into effect later this month
COMPETITION: Win a star-gazing camping adventure to the stunning Aran Islands for you and your housemate
Here are the restrictions being eased today as Ireland continues reopening
QUIZ: Can you identify the EU country of origin from these €1 coins?
You may also like
1 month ago
Gardaí raid and shut down illegal shebeen in Co Offaly
3 months ago
62 dogs and puppies seized at puppy farm in Offaly
6 months ago
Man in serious condition following road collision in Offaly
7 months ago
Hotel in Offaly closed following Covid-19 cluster
8 months ago
"No fault...no blame" for people of Kildare, Laois and Offaly for lockdown
8 months ago
HSE and HSA approve reopening of Carroll Cuisine food plant in Offaly
Next Page