Pic: So these are the Adidas boots that the stars will be wearing at the World Cup next month

No fear of Messi and company not standing out from the crowd in Brazil, that’s for sure.

As exciting as it is for all football fans, football boot connoisseurs get a great kick out of World Cup time because some of the most iconic boots in history have been released to coincide with the four-yearly showpiece and there's a chance that the ones worn this year may become timeless classics like those that went before.

You might remember Adidas, for example, releasing different versions of their famous Predator range around the time of the World Cup – the beautiful Predator Manias for instance, were released prior to the 2002 edition – and just in time for Brazil, they’ve launched special edition boots from each of their five ranges before things kick off next month.

The so-called Adidas Battle Pack features new designs for the adizero f50, Predator, nitrocharge, 11pro and adizero f50 Messi boots, all of which come with their own distinctive black and white pattern, which will certainly do a good job of making the likes of Messi, Luis Suarez and Dani Alves stand out in Brazil. 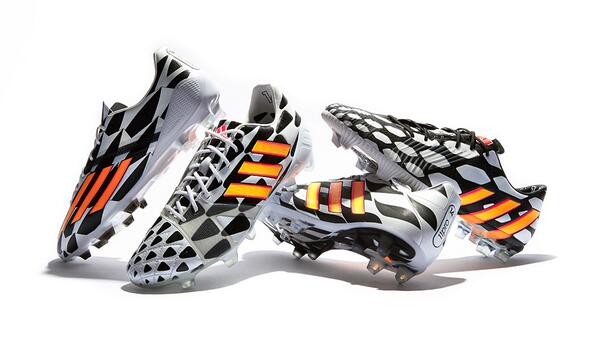 According to the spiel which always accompanies boot releases of this ilk, the black and white colourway is a visual representation of the adidas ‘all in or nothing’ World Cup campaign, with each boot exactly 50 per cent white and 50 per cent black, apart from Messi’s special adizero f50s, which have an added blue and white colourway representing his native Argentina.

The only other colour on the boots are ‘the fiery gold colours of the iconic three stripes of adidas, representing the ultimate reward of the FIFA World Cup trophy’ while the black and white patterns have apparently been inspired by the warpaint of native warriors and the iconic pavement patterns of ancient Mesopotamia, perfected on the Copacabana beach. Riiiggghhht.

On first impressions we’re not really sure what to think. One the one hand, they look distinctly like a pair of Vans with the chequered black and white pattern, but on the other hand, they’re a design we can see growing on us, particularly on repeated viewing once the action gets underway next month.

What do you think folks? Feel free to let us know in the comment box below.

popular
Amazon Prime Video has quietly added 18 big releases to its library
Here's where all the 149 tickets that won €36,687 in Saturday's Lotto were sold
Man arrested on suspicion of the murder of Ashling Murphy
Moon Knight could be leading directly into Marvel's scary version of the Avengers
New HBO comedy series looks like a must watch for Flight of the Conchords fans
Euphoria fans delighted after learning Fezco's Irish connection
Confirmation on lifting of restrictions for pubs and events expected this week
You may also like
6 years ago
Video: It's a year today since the most remarkable game of last year's World Cup
6 years ago
Opinion: The late, great Bill O'Herlihy and what made him such a national treasure
7 years ago
Video: The best showboating from this summer's World Cup in Brazil
7 years ago
Video: The Tralee man with the most famous GAA jersey at the World Cup has made a video recounting his amazing experience
7 years ago
GIFs: FIFA reveal the best goals of the 2014 World Cup
7 years ago
FIFA announce a team of the World Cup based on fan votes and it has a few issues
Next Page