Pic: The David Moyes protest plane is getting ready for take-off

Some disgruntled Manchester United fans are getting their chartered plane ready to fly over Old Trafford tomorrow with a banner saying 'The Wrong One - Moyes Out'.

Earlier in the week it was reported that plans were afoot for an aerial protest during the Manchester United v Aston Villa match at Old Trafford tomorrow. It looks like the story could indeed be true as we can see from the picture below. 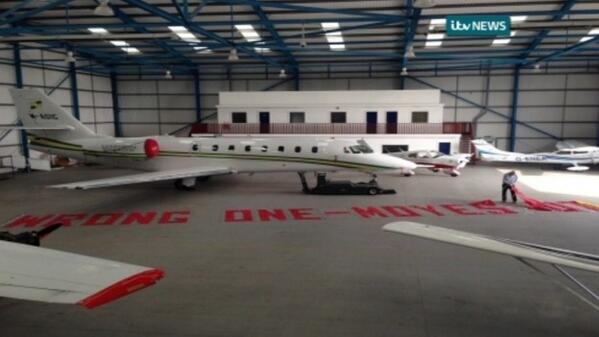 David Moyes responded to questions about the impending protest by saying 'They are entitled to do that as fans'. Some United have expressed their opposition to the protest while others have seen the funny side...

popular
Gardaí unveil new Armed Support Unit vehicles to replace older models
Netflix has just added 33 very big movies to its library
Fish and chips could be removed from Irish menus over rising fuel costs
The full list of cancelled flights in and out of Dublin Airport on Monday (so far)
NOW announces large reduction to its monthly membership prices
Increase in passenger charges at Dublin Airport may be on the way
QUIZ: It's time for one of our trickiest General Knowledge Quizzes yet
You may also like
1 month ago
BBC trainee accidentally posts message mocking Man United live on TV
1 year ago
COMPETITION: WIN a copy of Eric Cantona's new Manchester United documentary, The United Way, on DVD
1 year ago
Manchester United documentary written by Eric Cantona available to watch at home in Ireland this May
1 year ago
Marcus Rashford launches book club to help kids experience 'escapism' of reading
1 year ago
Paul Pogba releases powerful statement in response to 'fake news' from The Sun
1 year ago
The JOE Pub Quiz: Week 214
Next Page