Pic: This snap from a College Football game on Saturday might be the sporting photo of the year

Not only did the Bulldogs and the Vols deliver one of the games of the year on Saturday (Georgia scored a touchdown in the dying seconds to force overtime and then kicked a field goal to win), but, thanks to USA Today Sports Photographer Jim Brown, it also delivered what surely must be one of the sporting pictures of the year.

The perfect photo opportunity arose during the third quarter, when Volunteers receiver Marquez North had to make a spectacular leap in order to find his way into the endzone for a touchdown. 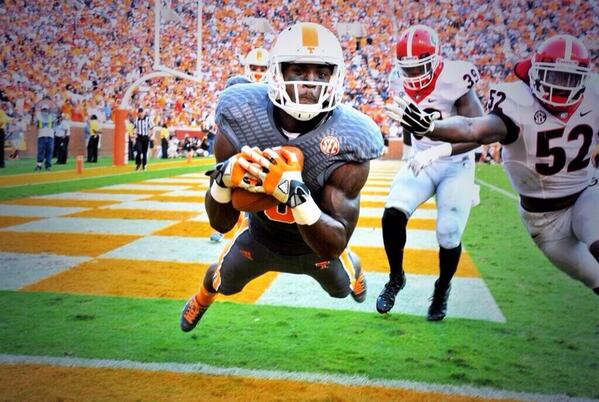 Brown managed to catch him in the process of doing so and as well as brilliantly capturing the leap, the despairing attempts of the Georgia defenders and the ridiculous muscle definition in Marquez’s arms, such is the quality of the picture that it appears as if Marquez is consciously staring triumphantly into the camera before hitting the ground.

Either Brown was using a seriously high-quality lens or was close enough to the action that he may well have been demolished by Marquez or one of the chasing Bulldogs players immediately afterwards, but even if he was, it would have been well worth it for probably the best sporting picture we’ve seen all year.

The Big Reviewski || JOE · TBR Spotlight: Loki - Episode Two - 'The Variant'
popular
Garda union hits out at "absolute confusion" over outdoor drinking and dining
Gardaí will use "discretion" over outdoor drinking at pubs and restaurants
The Queen appealing for volunteers to weed the garden of her Sandringham Estate
Matt Damon planning return trip to Ireland to travel around the country
QUIZ: Can you get full marks in this potentially very frustrating general knowledge quiz?
Man in his 60s killed following assault at home
The JOE Friday Pub Quiz: Week 248
You may also like
6 years ago
Video: Utah's Kaelin Clay makes an absolute bags out of this touchdown
6 years ago
Video: The Ohio State marching band raise the bar with this brilliant routine
6 years ago
Video: Ouch! Canadian college football receiver runs straight into goalpost
6 years ago
Video: This GoPro footage of players in the tunnel before a college football game is pure class
6 years ago
Ahead of the Croke Park Classic here are the very best bits of the 2013 College Football season
7 years ago
Video: College football offensive lineman squats 365kg with barely a bother on him
Next Page