Pics: Liverpool fans turned up to training today with these brilliant banners

After a huge win this past weekend and some emotional scenes in the aftermath, Liverpool fans, even those who thought that it was folly to dream of a league title, have become believers, and are desperate for a taste of glory again.

Today at the training facility in Melwood, a few fans showed up, with banners in tow, to let the players know how important this was, echoing the words of their captain Steven Gerrard. 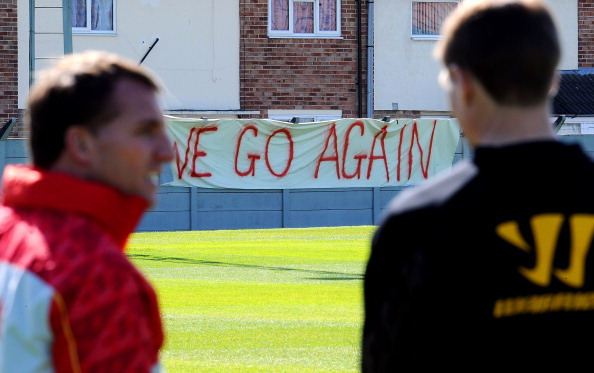 Manager Brendan Rodgers went over to speak with the fans who'd made the trip to the training ground and thank them for their support, and there was more than one group present with messages of support.

As if the players needed any more inspiration and motivation after Sunday, then they have all they need here. A League win would make history, undoubtedly and, as the banners show, would make dreams come true on Merseyside once again.

popular
The "eighth best movie ever made" is among the movies on TV tonight
Mia Khalifa claims seaside town is better than Miami
Jennifer Lawrence sparks controversy by saying she was the first woman to lead an action movie
Met Éireann updates weather warning for entire country as temperatures set to fall to -6
One of the best films of all time is among the movies on TV tonight
The 50 most iconic songs of all time* have been revealed
QUIZ: JOE’s Big News Of The Day Quiz #27
You may also like
2 weeks ago
Will Ferrell is looking for someone to put him and his mum up in Liverpool
3 months ago
Nine-year-old girl shot dead in Liverpool
6 months ago
Merseyside police defend ‘exemplary’ Liverpool fans tear gassed by French police
1 year ago
Police issue warning over CCTV footage of Liverpool bomb explosion
1 year ago
Liverpool bomb declared a terrorist attack as police confirm fourth arrest
1 year ago
Liverpool bomb: Taxi driver "locked bomber inside car" after spotting explosives (Report)
Next Page