Now you can see what those pesky metatarsal bones look like.

While the wave of World Cup boot launches is all but done now, we are already getting leaks of new boots for next season. The good folks at FootyHeadlines, with a little help from Spanish site called Só Chuteiras, have published these dazzlers by PUMA today.

Said to first worn by the likes of Sergio Aguero, Olivier Giroud and Falcao in July during pre-season games, these are a variation of the evoSPEED boot called the 1.3 Tricks Feet Anatomy Boot. And it does exactly what it says on the tin.

The boot is simply white with a 'muscle and bone' design all over the boot, with the famous PUMA logo only appearing on the tongue. We think it looks spectacular but we're not sure we'd be brave enough to wear them against some of the defenders we've faced over the years. 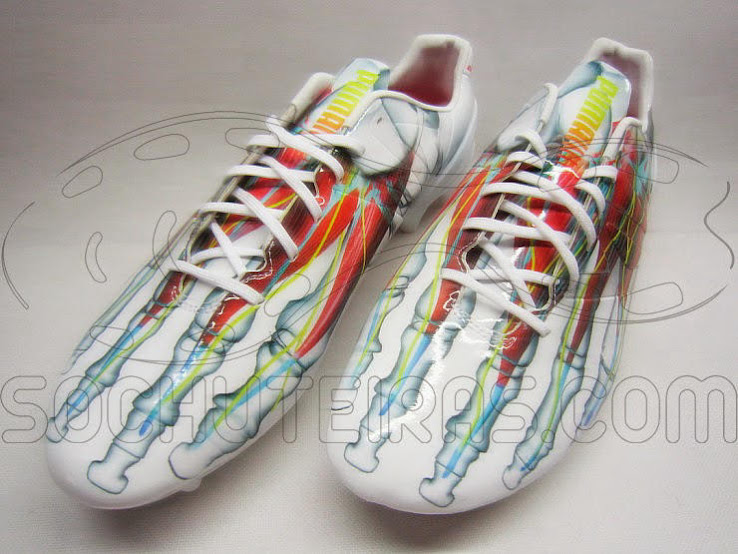 popular
The full list of cancelled flights in and out of Dublin Airport on Monday (so far)
Netflix has just added 33 very big movies to its library
QUIZ: Can you guess the crisps from the pixelated packet?
QUIZ: It's time for one of our trickiest General Knowledge Quizzes yet
One of the coolest movies of recent years is now available to watch at home
Six people dead after mass shooting at Fourth of July parade in Illinois
One of the best sports movies of recent years is now available to stream at home
You may also like
3 years ago
PERSONALITY TEST: Is it high time you bought a new pair of football boots?
3 years ago
Puma are bringing back an iconic boot and it's as gorgeous as ever
5 years ago
PICS: Adidas to re-release arguably their best ever boot to coincide with David Beckham’s birthday
7 years ago
Bad news football boot fans; adidas are getting rid of the Predators
7 years ago
Nearly half of all Premier League footballers wear white boots, incredibly important study reveals
7 years ago
Pic: Damn! Ben Brosnan has some amount of vintage football boots in his shed
Next Page