Picture: An Arsenal supporter managed to sneak into the Tottenham dressing room, and he's not a Gareth Bale fan

One Arsenal fan has managed to sneak his way into Tottenham's dressing room, and he had Gareth Bale's jersey firmly in his sights

We're not sure exactly when this picture is from, but it popped up on our radar recently and we felt we had to share it. This fan, who we don't have any detail on either (the whole incident is a bit shrouded in mystery, really) has managed to get into Tottenham's dressing room and used Gareth Bale's jersey in a way which the manufacturers never intended. 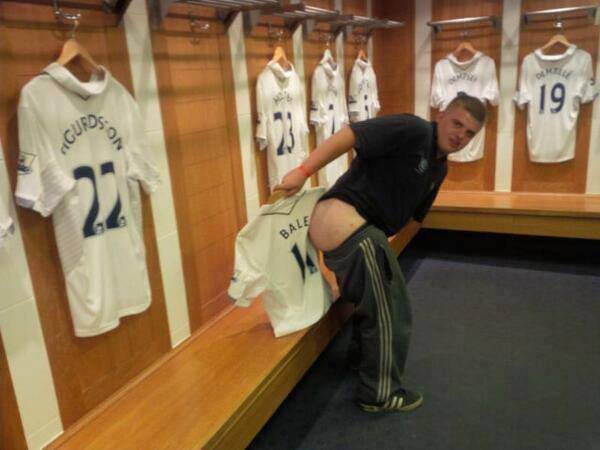 It looks to be last season's jersey that he's gotten his hands on, so it won't have happened in the last few months, but for some reason it's only popping up now. It's a classy gesture anyway, this guy really puts the Arse in Arsenal.

popular
Amazon Prime Video has quietly added 10 big new movies to its library
The new restrictions likely to be introduced as NPHET meets with Govt
Yet another new Wetherspoons is set to open in Dublin city centre
8 great new additions to Amazon Prime Video in December
House of Gucci has the best sex scene from a big Hollywood movie in years
The 50 most iconic songs of all time* have been revealed
Clint Eastwood's final western is among the movies on TV tonight
You may also like
4 days ago
Who tweeted it: Simu Liu or Rahul Kohli?
1 week ago
Cow escapes field, heads to resort and gets stuck on water slide
2 months ago
Drunk man reported missing ends up joining search party to find himself
3 months ago
WATCH: The interview between Niall Horan and Lizzo is an absolute flirt-fest
3 months ago
Why improv comedy is the exact night out we all need right now
6 months ago
Adam Sandler reunites with IHOP hostess who turned him away
Next Page