Unflattering profile pictures in a match programme are nothing new, but Jonathan Walters looks like he has just gone ten rounds with Mike Tyson’s in tonight’s edition.

The Stoke forward is renowned as a hard-working, brave and abrasive character on the pitch and with a shiner on his right eye and unshaven face, he’s certainly living up to that image in his profile picture in the programme for the Ireland v England game this evening, which was tweeted out by Ken Early of Second Captains fame just a little while ago. 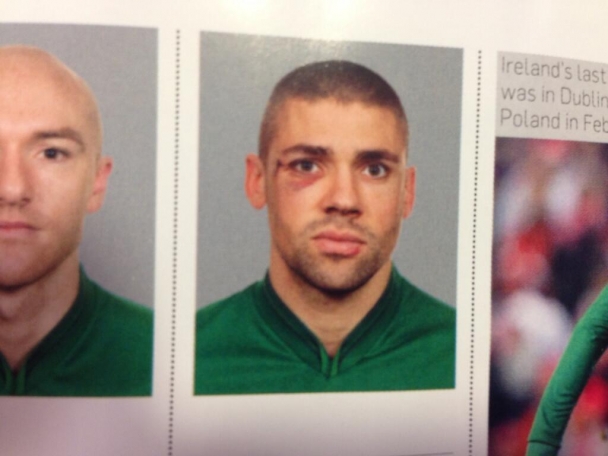 You should see the other guy.

popular
Fish and chips could be removed from Irish menus over rising fuel costs
Netflix has just added 33 very big movies to its library
The full list of cancelled flights in and out of Dublin Airport on Monday (so far)
Jordan Peterson suspended from Twitter over Elliot Page comment, says he won't apologise
Increase in passenger charges at Dublin Airport may be on the way
The long-awaited MetroLink is finally happening, for real this time, honest
An action-packed thriller is among the movies on TV tonight
You may also like
2 years ago
"I’d rather have a couple of mates than a couple of medals" - Jason McAteer responds to Roy Keane comments
3 years ago
There was a huge reaction to Jonathan Walters' emotional interview on The Late Late Show
3 years ago
Jon Walters shares his colonoscopy experience in attempt to raise awareness of bowel cancer
3 years ago
Jon Walters issues statement on departure of Martin O'Neill
3 years ago
Jon Walters all but confirms the Stephen Ward Whatsapp story
5 years ago
WATCH: Jon Walters belter opens the scoring against Uruguay
Next Page