Picture: One track mind - driver blocks Luas tracks to get to adult store

If you were waiting on a Luas for an extra few minutes on the red line tonight, here's the reason why

Parking is often a tricky art in the city center, and people can sometimes be seen to be really chancing their arm when it comes to finding a space to stop in.

In this incident, one particular driver made a real boob of themselves by parking on the Luas tracks so that they can head into the local adult store. The Luas certainly appears to have been blocked by this bit of interesting parking, so we're sure the tram driver would have really blown the horn. That said, we imagine the culprit will get (nipple) clamped for this if a parking warden comes along. 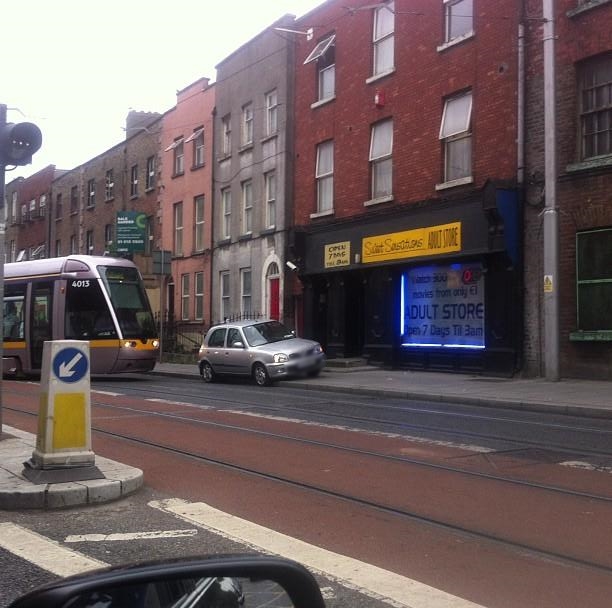 We're not sure if the Luas was able to make it past, as it looks like it would be a pretty close shave, but given where he parked, he should have seen this coming.

We've been reliably informed that this incident took place on James Street, as we don't know where any of these adult shops are, of course...

Hat tip to Michael Conneely for sending this pic our way

popular
QUIZ: You'll need to be razor-sharp to get 100% in this General Knowledge Quiz
The JOE Friday Pub Quiz: Week 307
The JOE Music Quiz: Week 117
An exciting Irish crime thriller is among the movies on TV tonight
Shooting stars set to light up Ireland's skies this weekend
James May reportedly hospitalised after crashing into wall at 75mph filming new show
Record for hottest August day in Ireland ever has now been broken
You may also like
3 days ago
The Ultimate "That Actor From That Thing" Quiz
1 month ago
The Chase star Bradley Walsh can't control his laughter after the most NSFW answer ever
1 month ago
WATCH: Lightyear star reveals who'd win in a fight between him and Thanos
1 month ago
30 years on, The Simpsons writer confesses he misunderstood iconic joke
5 months ago
30 years ago, Arnie's biggest prank ended with Stallone's biggest flop
6 months ago
China gives Fight Club a new ending, manages to completely change the plot of the movie
Next Page