Picture: Things got heated as Derry took on Down today

It was a passionate affair as Derry took on Down, but there was plenty of action elsewhere in the GAA today too

Derry's Chrissy McKaigue and Down's Benny Coulter were not on the best of terms during the game today as they squared up to one another, a moment which was perfectly captured in this picture. 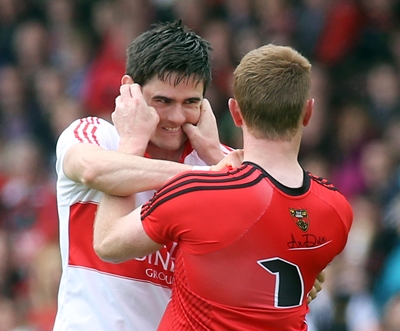 It was Coulter's side who came off the winners though, as they beat Derry by a score of 2-17 to 1-15, and will be headed to an Ulster semi-final against all Ireland champions Donegal.

In the hurling, Clare overcame Waterford by a score of 2-20 to 1-15, in front of a 12,000 strong crowd, with a superb shift put in by Brendan Bugler for the Banner County, meaning Waterford will have to make an assault on the qualifiers.

The Big Reviewski || JOE · The Big Reviewski with Y: The Last Man, that Malignant ending & a secret streaming service
popular
Aer Lingus announces flight sale as US to lift travel ban for vaccinated EU passengers
Cork City Centre described as a "no go area" after man pulled from wheelchair in violent attack
The 50 most iconic songs of all time* have been revealed
The Big Reviewski JOE Movie Quiz: Week 120
The weather for the week ahead looks very autumnal indeed
PICS: The man with the biggest penis in the world has one unbelievable problem with it
QUIZ: Give your brain the pump it deserves with this general knowledge quiz
You may also like
3 days ago
Two men charged with the murder of journalist Lyra McKee
1 month ago
Appeal for information as man attacked with strimmer in Derry
5 months ago
"Deep concern" as burning car abandoned on train track in Northern Ireland
11 months ago
61-year-old woman in critical condition following shooting in Derry
1 year ago
This new Irish song is the lockdown 'LOVE' you need right now
1 year ago
It's March 20 and it's just like every other day in Northern Ireland
Next Page