On the day the journalist and television presenter turns 48, we look at five of Piers Morgan’s biggest Twitter spats, of which there are plenty to choose from.

There will be plenty of celebrities who won’t be rushing out to send a birthday card in Piers’ direction, and footballers haven’t escaped his sharp tongue either.

Back in 2010 Morgan described Twitter as “pathetic, juvenile and a pointless waste of time”, words that could be levelled at the birthday boy over some of his comments on the social media network.

Anyway, he has come round to Twitter in a big way, with his 3.3 million followers sure that he is never far away from irking others online. Here is a flavour of some of his tweets.

The United centre-half has been the butt of many a dig from the television host. A couple of years ago they spent four hours trading insults from “sacked editor” to “sicknote” back and forth.

Morgan continues to leave comments for the presumably now former English international, though he doesn’t rise to the bait like he used to.

Generally considered to be one of football’s Mr. Nice Guys, you really have to go to lengths to get the former Liverpool and United striker to call you a scumbag. But this is Piers Morgan, so nuts to a monkey as hurling analyst Cyril Farrell would say. 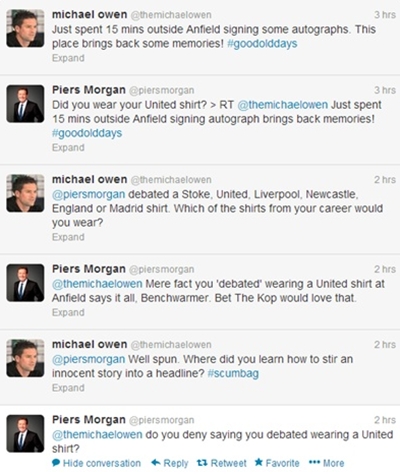 Not exactly a shrinking violet herself – see here – on Twitter, Morgan knew that a provocative tweet would get a sharp response, and the musician didn’t disappoint. When he suggested she needed to grow her hair back after a change in style, the Barbadian didn’t mince her words.

Morgan is a self-proclaimed Gooner, but considering that Arsene Wenger and his charges get it in the neck, you can only imagine what he has had to say for the exodus of players that have left the Emirates in recent years are subjected to,

RVP’s move would have annoyed even the most passive Arsenal fan, so the US television host took particular glee in seeing United crash out of the Champions League at the hands of Real Madrid, a week before Bayern Munich ended Arsenal’s European hopes for 2013.

You may remember that around the time of the New Year that Morgan created quite the shi*storm in America with his forthright views on gun-control. Not everyone was best pleased, including pro-gun campaigner Alex Jones, who started a petition to have the presenter deported which quickly gathered more than 30,000 signatures.

Morgan stuck to his guns so to speak, and even had Jones on his show, which caused further chaos. His Tweets continued to divide folk in the US, sparking the kind of reaction you imagine he craves. 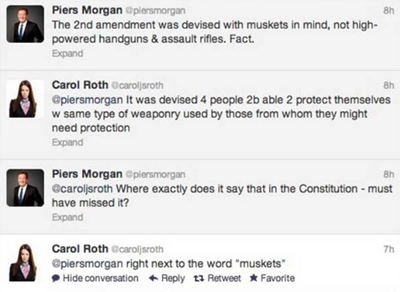 This week he showed that he knows a talented hurler when he sees one during a Q&A session. And when we say ‘sees’, we really mean ‘Google search’, but hey, at least he answered the question.

And it is hard to argue with his choice.

The Big Reviewski || JOE · The Big Reviewski with Dune, a mini-Hangover reunion & the best of Timothée Chalamet
popular
CONFIRMED: Nightclubs to open at 100% capacity, 11.30pm curfew has been removed
Brian Laundrie: 'Strong probability' remains found belong to missing fiance
QUIZ: Can you name all the countries beginning with L?
Over 300 vehicles detected speeding in first 10 hours of national 'Slow Down' operation
How to lower your cholesterol - 5 really handy tips
The 10 must-watch new (and old) arrivals on Disney+ this November
The cast of Succession on the most ridiculously expensive scene in the show
You may also like
5 years ago
WATCH: This video showing 'hand-rolled ice cream' in Dublin is mesmerising
5 years ago
There's a new app that helps people find any food, drink or product they're looking for, locally
5 years ago
5 reasons why your business should 'pop-up' at one of Dublin's busiest stations
5 years ago
JOE BUSINESS: 3 great reasons you should pop-up in Dun Laoghaire this summer
5 years ago
This new app will help you keep track of the Luas strikes
5 years ago
TWEETS: Mixed reaction as Joan Burton steps down as leader of the Labour party
Next Page