Possibly the best Alan Shearer picture ever to grace the Internet

It might take you a minute to get this, but once you do we hope you appreciate it as much as we do...

As you all have probably seen from his appearances on Match of the Day in recent years, Alan Shearer isn’t exactly the most charismatic of individuals, so it will come as little surprise to learn that this picture isn’t of the man himself, but it does bear at least a little resemblance to his name.

The picture, which was posted online recently and came to our attention thanks to the lads over at 101 Great Goals, shows a Newcastle fan in a vintage early-90s jersey standing alongside a sign in the Middle East that, when said aloud, corresponds to the name of a man who was a legend on Tyneside before settling for a life of bland mediocrity on the MOTD couch. 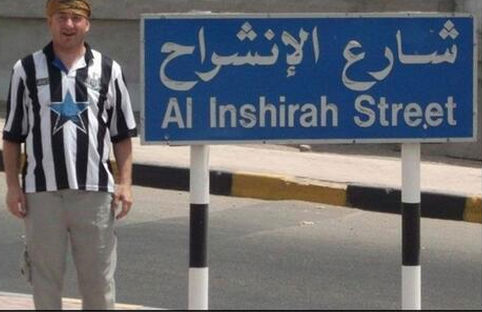 After some very brief research, we think the street is located in a place called Muscat in Oman, but we don’t think former Australian footballer, the notorious Kevin Muscat, enjoys the type of hero worship to justify fans standing beside a sign bearing his name, at least not yet.

popular
James May reportedly hospitalised after crashing into wall at 75mph filming new show
Disney+ has just added 10 big movies to its library
QUIZ: You'll need to be razor-sharp to get 100% in this General Knowledge Quiz
An exciting Irish crime thriller is among the movies on TV tonight
The JOE Friday Pub Quiz: Week 307
Netflix has just added an incredibly tense 97-minute thriller
A great underseen action thriller is among the movies on TV tonight
You may also like
2 years ago
The Coca-Cola Premier League roadshow is coming to Galway this weekend
3 years ago
The Football Spin on the Rafa Benitez conundrum, Chelsea's chance for glory and how English football anticipated Brexit
4 years ago
Irish international Ciaran Clark knocked unconscious in Magaluf bar attack (Report)
5 years ago
We really hope Michael Owen's tweet about Jurgen Klopp was meant ironically
6 years ago
10 of the worst ever signings in the January transfer window
6 years ago
TWEETS: Players, pundits and fans unite to pay tribute to Pavel Srnicek
Next Page