No, we have no idea why it look so long for us to finally induct a member of The Only Way is Essex into our 'Dressed in the Dark' section either...

If you haven't seen/been forced to watch The Only Way is Essex on Sunday nights (10:15 on TV3, apparently *cough*), you'll instantly recognise the stars of the 'reality' shows from the covers of women's gossip rags near the tills at Tesco.

This is a show featuring some incredibly dumb people but ran by some of the smartest in telly - that's why the stars only receive around 50p-a-week and have to supplement their income (while raising the profile of the show, naturally) by going to movie premieres, orchestrating fake relationship scandals and ensuring paparazzi are ready and waiting whenever their dog squats down mid-walk for a poo.

Amid the glossy, hairless, perma-tanned and experty straightened bouffant-wearers (and that's just the blokes), there is perhaps no bigger berk than Joey Essex, who despite claiming that his surname is actually Essex, has a cockney accent that borders on parody.

Essex was at The Three Musketeers London premiere (steampunk meets Orlando Bloom, exactly what the classic Dumas tale needed...) and showed up resembling a real-life Ken doll. Don't believe us? Take a look below: 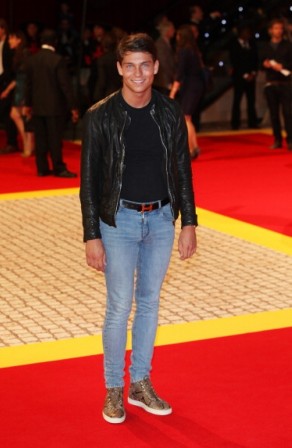 This is Joey Essex...

No, your eyes aren't deceiving you; that actually is an outfit with snakeskin hi-tops, figure-hugging stonewash denim, a tucked-in t-shirt and a Danny Zuko-style leather jacket. Of course, in Joey's world, he looks 'reem' (a completely made-up word he's fond of using) and not like someone whose modelled their fashion outlook on a guy with a flat plastic crotch. 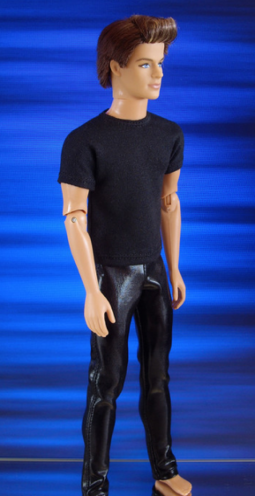 It does feel a little cruel to poke fun at the outfit of a man who didn't know that a hairdryer and blowdryer were the same thing but here at Dressed in the Dark, we have absolutely zero moral standards, only the highest of fashion standards. If we're being honest, the snakeskin alone was worthy of an induction, so don't even get us started on those jeans!

popular
Amazon Prime Video has just added 16 big movies to its library
Prince's team stop Nothing Compares 2 U being used in new Sinead O'Connor doc
Neil Young wants Spotify to remove his music because of Joe Rogan podcast
13 reasons why an employer can decline your right to remote working under new legislation
QUIZ: We bet you can't get full marks in this extremely frustrating geography quiz
UCD students provided with €30 gift voucher after toilets were contaminated with wastewater
Bono is at the centre of one of 2022's most emotional cinematic moment
You may also like
5 years ago
WATCH: This video showing 'hand-rolled ice cream' in Dublin is mesmerising
5 years ago
There's a new app that helps people find any food, drink or product they're looking for, locally
5 years ago
5 reasons why your business should 'pop-up' at one of Dublin's busiest stations
5 years ago
JOE BUSINESS: 3 great reasons you should pop-up in Dun Laoghaire this summer
5 years ago
This new app will help you keep track of the Luas strikes
5 years ago
TWEETS: Mixed reaction as Joan Burton steps down as leader of the Labour party
Next Page