The Kerry wing-forward has never been shy of making a fashion statement and he’ll be doing just that with his choice of footwear for the Munster Final clash with Cork in Killarney next month.

On his website this evening, Galvin posted a picture of the Adidas Nitrocharge boots he’ll be wearing on the day, boots that are green, white and gold, have the Kerry crest on them towards the heel and P. Gal 10 Ky inscribed on them towards the front.

How you like my new football boots??.... Customised.... http://t.co/sEpZXXypHZ 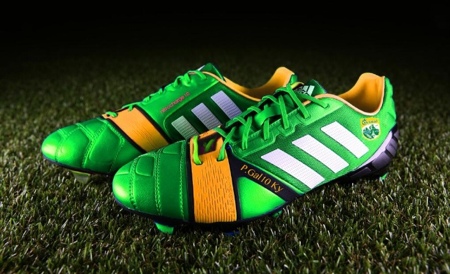 On first glance they look pretty decent to us, but what do you all think, will they be hit or miss in the Kingdom?

popular
County where winning Lotto jackpot ticket worth over €5.5 million was sold confirmed
Netflix reveals full line-up of new shows and movies arriving in July
Amazon Prime Video has just quietly added 15 big movies to its library
Friends co-creator says she's now "embarrassed" by the series' lack of diversity
The 50 most iconic songs of all time* have been revealed
Lidl announces six new warehouse clearance sales... for a limited time only
7 new and exciting Dublin attractions you need to try this summer
You may also like
3 weeks ago
Body discovered in Kerry in search for missing walker
1 month ago
Investigation launched into violent incident involving group of youths in Kerry
1 month ago
Man in his 50s dies following fatal assault in Kerry
1 month ago
Motorcyclist in his 60s dies following crash in Kerry
3 months ago
Man in his 70s dies following three-vehicle road traffic collision in Kerry
4 months ago
Tributes pour in after Screaming Trees frontman Mark Lanegan passes away in Kerry
Next Page