Star Trek Into Darkness, the sequel to J. J. Abrams 2009 Star Trek reboot-that's-not-a-reboot warps its way into our cinemas this week and it certainly doesn’t disappoint.

Abrams, the man who’s also been tasked with re-invigorating the sagging Star Wars franchise (no pressure there then), has delivered the space-goods yet again with a bigger, better and Benedicter sequel.

Right from the start, you know you’re in for a treat, with an ancient alien civilization having their own special close encounter of the Kirk kind in an exhilarating and beautifully-executed opening.

Following a double-whammy of an emotionally-powerful, near-silent terrorist attack on London, and a Godfather Part III-style ambush on Star Fleet headquarters in San Francisco, Kirk and crew are tasked with hunting down the man behind the mayhem, John Harrison (Benedict Cumberbatch). The problem is, he always seems like he’s one step ahead of them and, by following him to his secret location,  Star Fleet risk the possibility of all out war with the Klingons.

And so, to the villain. A perfect mix of brain and brawn, Cumberbatch’s menacing and ambiguous Harrison has been getting Trekkies talking and speculating for months on end and, while we’re not going to give away anything about his mysterious character here, he turns out to be more than a match for our cocky Captain Kirk.

Needless to say, Bennyballs Cumbypatch is absolutely perfect in the role, with one particular Hannibal Lecter-inspired scene allowing him to show everyone just how much of a brilliant actor he really is. 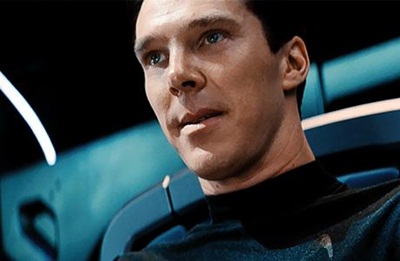 The rest of the cast also all have their moments to shine with Sulu (John Cho) scaring the pants off everyone at one point, Bones (Karl Urban) delivering a ridiculous amount of overly-dramatic “Dammit man, I’m a doctor/My God Jim!” lines and Simon Pegg providing his usual comic relief with his suspect Scottish accent.

The other real stand-out is the relationship between Kirk (Chris Pine) and Spock (Zachary Quinto) with Abrams absolutely nailing the balance between the two characters. Pine is simultaneously charming (stopping important conversations to flirt with passing ladies) and inspiring, proving that he’s the right man to “respect the chair,” which sounds remarkably close to a certain Tom Cruise Magnolia mantra.

Similarly, a more-in-touch-with-his-feelings Spock is an unexpected mine of humour and, at the same time, has his own issues to work through with inter-species love interest Uhuru (Zoe Saldana).

And of course, there may be an obligatory cameo...

Visually, Into Darkness is a thing of beauty. JOE caught this screening at the IMAX 3D and, while we’re never usually a supporter of the gimmicky glasses, Abrams has managed to insure that this is one of the few times that the effect is put to excellent use. When it works it really works, with Deep Space becoming a reality as Kirk and co-hort space-jump their way through an asteroid belt in just one of many spectacular action set-pieces.

Abrams, a Trekkie himself, hasn’t forgotten why people love Star Trek in the first place, and so there are plenty of twists and nods to the previous films, as well as the original series influencing both Michael Giacchino’s excellent mash-up score and the sexy retro costume design of the Star Fleet uniforms.

With this particular JOE not being an original Trekkie, we’re sure there are loads of in-jokes and sly references that we missed but, as far as big, fun, shiny sci-fi entertainment goes, this ticks all the boxes. 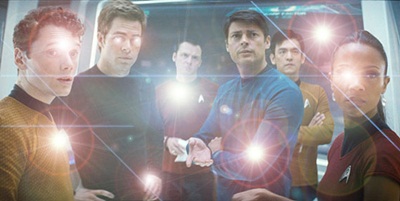 Of course, there are a whole bunch of plot holes like “how did she actually get on to that ship?” and “why did he do that when he could have just done that?” but let’s not forget that the screenplay was also co-written by Damon Lindelof, the man who co-created Lost so he probably looks on plot holes as his “thing.”

It’s safe to say though that, between Star Trek Into Darkness and Iron Man 3, this summer’s blockbuster season is proving to be a great one so far, so let’s just hope it continues to live long and prosper.

popular
Eurovision producers reveal "irregular voting patterns" during Saturday night's final
One of Liam Neeson's best ever performances is among the movies on TV tonight
QUIZ: Try out one of our trickiest General Knowledge Quizzes yet
Where will 2023's Eurovision be held if Ukraine can't host?
QUIZ: Can you name the disaster movie from a single image from each disaster
REVIEW: Van Gogh Dublin is a truly unique cultural experience
The JOE Movie Quiz: Week 154
You may also like
5 years ago
WATCH: This video showing 'hand-rolled ice cream' in Dublin is mesmerising
5 years ago
There's a new app that helps people find any food, drink or product they're looking for, locally
5 years ago
5 reasons why your business should 'pop-up' at one of Dublin's busiest stations
5 years ago
JOE BUSINESS: 3 great reasons you should pop-up in Dun Laoghaire this summer
6 years ago
This new app will help you keep track of the Luas strikes
6 years ago
TWEETS: Mixed reaction as Joan Burton steps down as leader of the Labour party
Next Page