Sunderland’s derby win over Newcastle last season was highly emotional for everyone on Wearside, but one fan has taken it further than most.

Staring down the barrel of relegation, Paolo Di Canio was brought in to replace Martin O’Neill and not only did he steady the ship, he also steered the Mackems to a 3-0 win over their biggest rivals at St. James’ Park.

The images of Di Canio doing his best Jose Mourinho impression on the sideline were a common sight the following week and one supporter has decided to get a tattoo of that euphoric moment for all Sunderland fans.

The scoreline should of course read NUFC 0 – SAFC 3, and if you look at his trousers, it looks as if the Italian is very “happy” indeed, but these are just minor details. 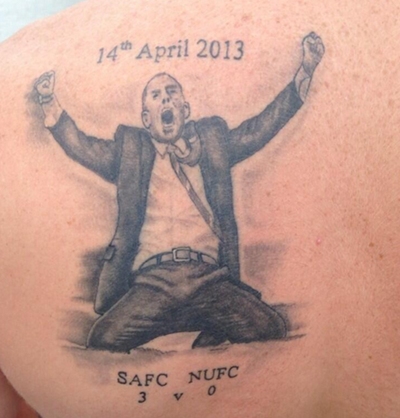 And we have seen far worse ink jobs in the world of football, from this hatchet commemoration of Chelsea’s Champions League win to even this questionable tribute to Didier Drogba.

Football fans and their passion.

popular
A classic Western is among the movies on TV tonight
One of the most underrated sequels of all time is among the movies on TV tonight
The JOE Friday Pub Quiz: Week 300 - the Triple Century
An underrated Jason Statham thriller is among the movies on TV tonight
The 50 most iconic songs of all time* have been revealed
Met Éireann gives update on weather warnings for this weekend
The content warning for this week's episode of The Boys is incredible
You may also like
3 years ago
Former Sunderland boss Simon Grayson has spoken out about popular Netflix documentary
6 years ago
James McClean really does love dealing with online trolls from Sunderland
6 years ago
James McClean's row with Lamine Koné is escalating quickly
6 years ago
Adam Johnson has been sentenced to six years in prison for child sex offences
6 years ago
Adam Johnson faces prison after he's found guilty of sexual activity with a child, Sunderland release statement
6 years ago
Jan Kirchhoff may have just had the worst debut in Premier League history
Next Page