We have highlighted some poor football tattoos in the past, but one Seattle Sounders fan has an ink job to rival the very worst of them.

From a Chelsea fan getting a Champions League tattoo from an artist that struggles with basic spelling, to former Newcastle striker Nile Ranger deciding to put his name on his face, to this questionable effort from Jay Bothroyd, there really is no shortage. And this MLS fan can join that unwanted list.

The signing of American international Clint Dempsey from Tottenham Hotspur was quite a coup for the Seattle club, so one supporter decided to pay homage with a tattoo job that resembled Mr. Potato Head more so than the former Fulham striker. 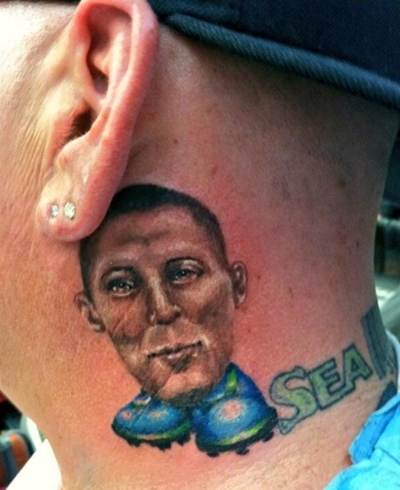 We also think the boots might be a little out of proportion, but maybe we’re being a bit picky.

popular
Amazon Prime Video has just added 38 very big movies to its library
The Pogues’ Shane MacGowan rushed to hospital
Rotten Tomatoes reveals the best reviewed movie of 2022
Matthew Perry can't rewatch any of Friends for heartbreaking reason
Lady Gaga's dognapper sentenced to 21 years in jail
Simpsons writer has explanation for the show being able to predict so many major events
Mia Khalifa claims seaside town is better than Miami
You may also like
3 years ago
COMPETITION: Win 4 tickets to our sold-out UEFA Champions League Final event
4 years ago
Only Roy Keane could possibly see the negative side to Liverpool's 5-0 win over Porto
5 years ago
Liverpool's Dejan Lovren is trending on Twitter
7 years ago
Vine: Jack Wilshere can't help himself, slags off Tottenham during celebrations
7 years ago
Manchester United set to launch £40m bid for Spurs striker
7 years ago
Vine: Tim Sherwood's return to Tottenham is summed up in one perfect Vine and tweet
Next Page