In the end it was just a solitary point that separated the two teams but few would argue that Dublin didn’t deserve their victory over a Mayo side consigned to back-to-back defeats.

The fact that James Horan’s men lost by just a point, the third final in four years to be settled by the bare minimum, could give reason for optimism, though given their dreadful record in finals in recent times may mean it will take some time for that realistaion to set in.

Dublin have lit up the 2013 championship with their attacking style and in every game they have played the boys in blue have coughed up umpteen goal scoring opportunities to put even more of a gloss on the scoreline. And that is still taking into account the fact they scored a whopping 13 – 99 in just six games, an average of 29 points per game.

The first half on Sunday saw a huge amount of turnovers and dispossessions as both teams seemed to take their time to warm to the occasion before Mayo began to start putting scores on the board. Cillian O’Connor, despite not being as razor sharp as normal was knocking over frees, Andy Moran was having his best performance of the season and Lee Keegan was a marauding presence from full-back, knocking over two points to take his championship tally to nine.

However Bernard Brogan’s goal restored Dublin confidence and while they trailed at the interval by a point, Mayo shot stopper Rob Hennelly was called on to make two outstanding saves to prevent the green flag being raised again.

Less than 15 minutes after the resumption however and Jim Gavin’s men had outscored their opponents by 0-5 to 0-1, with Brogan in sublime form despite the best efforts of Ger Cafferky, Diarmuid Connolly a menace in the half-forward line and the midfield duo of Cian O’Sullivan and Michael Darragh MacAuley more prominent than the O’Shea brothers.

A goal from Andy Moran brought the men from the west back into it, but the Dublin response was instant. Substitute Denis Bastick went charging up the field to offload to Brogan who palmed the ball to the net for the second goal of the game.

Mayo struggled for long periods up front, with the substitutions having little effect and it was telling that Moran’s goal was their only score from play in the second half.

A couple of late point saw the margin reduced, but Mayo simply couldn’t find a way past the Dublin rearguard and the final whistle saw Dublin add Sam to their Leinster and National League titles. 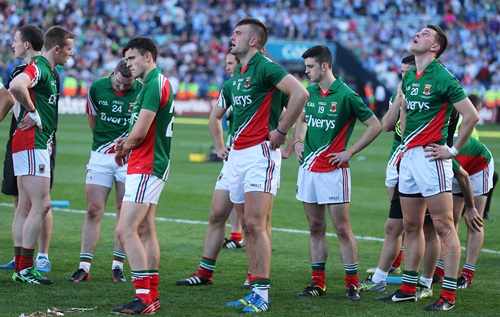 Dejection after the final whistle

It was another bitter journey to Croke Park for a Mayo side. The minor victory earlier in the day over Tyrone is their only All-Ireland Final success at minor or senior level in their last 16 attempts, but the outlook isn’t as gloomy as some would make out.

They proved this year they are the second best team in the country – no shame considering the wealth of talent at Dublin’s disposal – and from 1 – 9 they would hold their own against any team. Up front they may be lacking a bit of a cutting edge, especially with Cillian O’Connor nursing an injury, but if the minor performance is anything to go by, they have some serious talent coming through.

As for Dublin, well the future looks very bright indeed. Two wins in three years, a youthful age profile and a highly competitive squad means that they will rightly start the 2014 as bookies favourites to make it back to back titles. Few would back against them at this stage.

popular
Simon Cowell concerns fans with appearance as they 'don't recognise him'
Junior doctor 'fell asleep' at the wheel after 12-hour shift then mowed down two women and two kids
An Oscar Best Picture winner is one of the movies on TV tonight
Netflix has just added 30 big movies to its library
Starbucks worker breaks down in tears after they're scheduled to work 8 hours
Woman left confused after DNA test shows child isn't husband's despite her claims that she never cheated
One of the best movies of the decade has just been added to Netflix
You may also like
1 week ago
Dublin nightclub suspends security guard following racism allegations
2 weeks ago
QUIZ: How well do you know the towns and villages of Dublin?
4 weeks ago
6 deadly whiskey distilleries and experiences to try out in Dublin
1 month ago
Man in serious condition following assault near Connolly Station in Dublin
1 month ago
Gardaí investigating "all the circumstances" following discovery of woman's body near Luas tracks
1 month ago
Two girls seriously injured in crash involving car and pedestrians on busy Dublin street
Next Page