The Noise from Brazil: James McClean makes an excellent point and Costa Rica's president loved the win over Uruguay

The Derry man tries to get some credit for Ireland and Costa Rica's top man acts just like we'd imagine Michael D would if Ireland won a World Cup match.

We think the technical term for this World Cup so far is 'frickin superb'. The goal-per-game average is well north of three and we have seen some stunning team displays already. Only yesterday we were treated to three quality games, with Colombia, Costa Rica and Italy all great to watch on the way to victory.

James McClean also watched the games with interest and he noted that Ireland had played two of those sides in recent weeks.

He's not wrong but many people replied to tell him he was, mostly in language we couldn't possibly reprint.

Up until just now, we had never heard of Costa Rican president Luis Guillermo Solís but we are big fans now. Only in the gig since May, he joined his fellow country folk to watch their World Cup opener against Uruguay yesterday.

And, like his fellow country folk, he bloody loved it when they overcame the odds to beat the well-fancied South Americans.

If Ireland do make it to the next World Cup, we fully expect to see Michael D literally donning the green jersey and giving it socks if the Boys in Green do well.

Despite a fine strike by Keisuke Honda, our boys lost 2-1 to Ivory Coast overnight, putting them in a spot of bother in Group C. A win now against Greece is a must or else they will be on that very cool plane and heading home.

And while the loss of one of the best shirts in the tournament would be bad enough, fans like this fella will be gone too. Now this is commitment to your team. 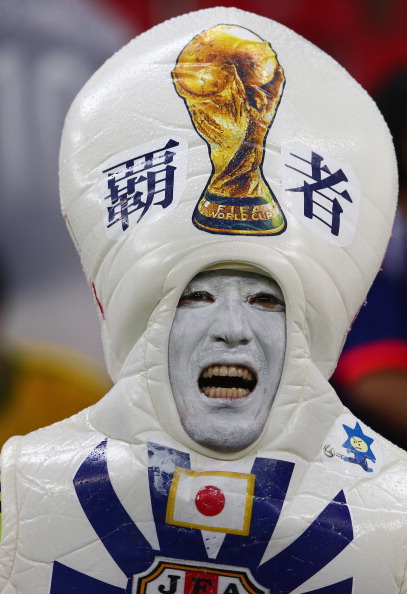 Looks like we will have to up our game...

popular
Man arrested on suspicion of the murder of Irish man in London
Here's how to make €9-11 on Revolut in just a few minutes
New car-free town with population of 85,000 set to be built in Dublin
Galway City Council street cleaners claim Lotto jackpot worth over €5.5 million
Elderly Irish man stabbed to death on mobility scooter in London
QUIZ: Can you name all the countries beginning with A?
Articulated lorry driver in his 20s dies in Tyrone
You may also like
7 years ago
Video: It's a year today since the most remarkable game of last year's World Cup
7 years ago
Opinion: The late, great Bill O'Herlihy and what made him such a national treasure
7 years ago
Video: The best showboating from this summer's World Cup in Brazil
8 years ago
Video: The Tralee man with the most famous GAA jersey at the World Cup has made a video recounting his amazing experience
8 years ago
GIFs: FIFA reveal the best goals of the 2014 World Cup
8 years ago
FIFA announce a team of the World Cup based on fan votes and it has a few issues
Next Page