The Sundae Supplement: United with a big shopping list and Joe Kinnear might be set for some work

It’s our last weekend transfer gossip and there seems no shortage of players linked with deadline day moves tomorrow. Though it involves a lot of familiar names at this stage.

With only a little more than 24 hours left in the transfer window, it’s squeaky bum time for players, managers and agents as clubs look to finalise their squad until at least January.

Gareth Bale has had plenty of time to brush up on his Spanish and is expected to sign on the dotted line tomorrow, though this has caused a little more work for workers at the Bernabeu. The Sunday Express say that part of the hold-up is that Daniel Levy is looking for an additional £10 million should Bale be sold to a Premier League side in the future. Hmmm, we heard he is a dab hand at the negotiation table alright.

David Moyes is expected to make at least one signing tomorrow after being linked to a whole host of players. A £21 million bid for Athletic Bilbao midfielder Ander Herrera was rejected with a  second bid expected (Mail on Sunday), while Daniele de Rossi could join him at Old Trafford. The Daily Star suggests a loan deal, while The Sunday Express says a £10 million bid could suffice. The Leighton Baines/Marouane Fellaini joint-bid is still doing the rounds in the papers. 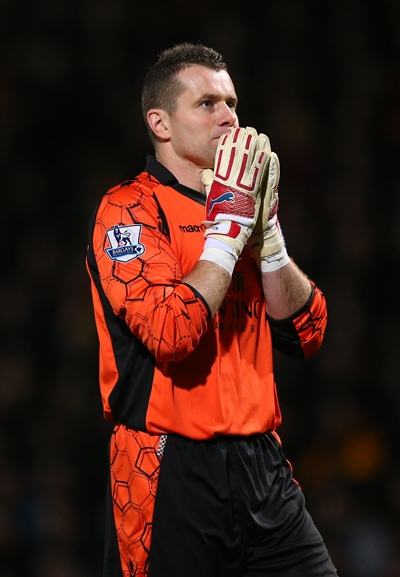 Could Shay be on the move to Merseyside?

It is poised to be a busy day at Anfield too with £12million PSG defender Mamado Sakho expected to sign today and Victor Moses looks set to make the move on loan for the season. According to The Sunday Express, the Chelsea man has chosen the red half of Merseyside after Roberto Martinez was hoping to reunite with his former player. Tiago Ilori and Shay Given have also been linked to the Reds.

Joe Kinnear might have to do a day’s work in Newcastle with the latest club linked to England U-21 star Tom Ince. The Daily Mirror also says that they are trying to off-load Gabriel Obertan and bracing themselves for a £15 million bid from Arsenal for Yohan Cabaye.

Arsene Wenger may have a reputation for short hands and deep pockets, but we are yet to see if that is about to change. The Gunners are still being linked with Schalke's Julian Draxier and Real Madrid's Mesut Ozil, while they have revived their interest in axed Holland star Wesley Sneijder (The Daily Star), while The Mirror says Jefferson Montero is the contingency plan if they fail to land a big name. That seems a big if to us.

Crystal Palave have made a £5million bid for Wigan winger Callum McManaman (The Sunday Mirror), Sunderland boss Paolo Di Canio wants Manchester United left-back Alex Buttner on loan (The Sunday Express) while Chelsea are negotiating to sign Ghanaian international winger Christian Atsu from Porto with the fee expected to be £2.6million (The Sunday Express). Because you can just never have enough midfielders.

There's more action from the Premier League season today, as well as La Liga, the GAA and lots more sports, so the last place we want to be is in the kitchen when we could be watching sports on the TV. Don't worry though, let the lads at Supermacs look after all the grub, they've even sorted you out a discount. Just click on the logo below.

popular
Amazon Prime Video has just added 38 very big movies to its library
The Banshees Of Inisherin is arriving on Disney+ sooner than you might expect
Mia Khalifa claims seaside town is better than Miami
Kirstie Alley: Cheers star dies aged 71
Simpsons writer has explanation for the show being able to predict so many major events
Dissection of a woman's body to be shown on Channel 4 tonight in TV first
Woman hit by rollercoaster is trapped in own body after finally awaking from coma
You may also like
3 days ago
The JOE Friday Pub Quiz: Week 323
5 days ago
Cristiano Ronaldo 'agrees £173m-a-year deal' with Saudi club
1 week ago
Miss Croatia slammed for raunchy World Cup videos that ‘disrespect Qatar’
1 week ago
World Cup 2022 Day Six: All the major action and talking points
1 week ago
Japan fans explain why they clean up after World Cup matches
1 week ago
The JOE Friday Pub Quiz: Week 322
Next Page