Three things we learned from Mayo's defeat of Tyrone

Mayo finally got the test that they had so far avoided in this year’s championship, but ultimately they proved too strong for an injury-depleted Tyrone outfit to reach a second successive All-Ireland Final.

While the build-up to the 2012 decider was almost at a frenzied level, James Horan’s men seem more at ease 12 months on, and tellingly Aidan O’Shea spoke in the post-match interview about their preparations for the final which begin today. They have been planning all along for a final, and planning for a win.

Mickey Harte will rue injuries to key players, a failure to tack on more scores during the dominant first-half performance and can feel slightly aggrieved at the penalty decision, but in truth were second best on the day, with Mayo showing a clinical nature when it mattered most.

Here are the key things we learned from the encounter.

Mayo can rise to a challenge

A lot had been spoken of the feeble opposition in Connacht and their annihilation of Donegal in the quarter-finals, and questions were rightly asked about how this team would perform if they were under serious pressure. After half an hour yesterday they were 0-7 to 0-4 down with half-time approaching and their marquee forward gone off injured. No forward had scored from play, and their assured performances thus far appeared to be nothing but a memory.

In the five minutes before and after the break, Mayo scored 1-3 to no score and from there on in the game was never in doubt. Many pundits and observers made the point that previous Mayo teams would have crumbled in a similar scenario, especially given the wayward shooting at times in the opening period, but they stuck to their guns, and as James Horan said afterwards, “figured it out” on the pitch.

Backs win games, forwards decide by how much

That old chestnut was never in greater evidence than it was in Croke Park yesterday. When things were most bleak for Mayo yesterday, it was their backs that took the fight to Tyrone and it was their impetus that led the revival just before the break. 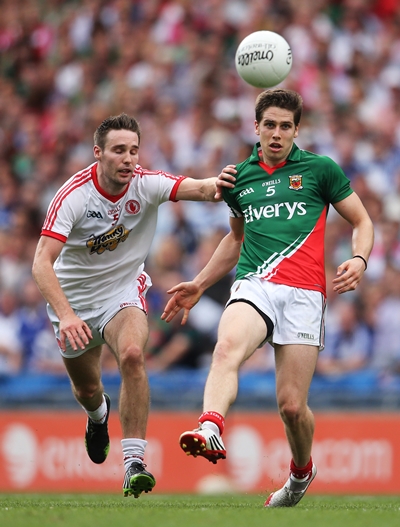 Another stellar performance from Lee Keegan

Last year Donegal’s success was built on a rampaging half-back line and the Mayo trio are every bit as good as the 2012 vintage. Colm Boyle was an attacking threat throughout the game, with one of his many runs resulting in the concession of the penalty – more about that later – while Lee Keegan on the other flank chipped in with a point in the first half and got on a huge amount of ball. Donal Vaughan was highly influential throughout, while Chris Barrett’s two points from corner back settled the nerves in the first half during a time when the forward line was struggling to get into the game.

With Ger Cafferky again a pillar on the edge of the square and Keith Higgins an integral part of the defensive system, the Mayo rear-guard may not have been overly worked defensively this summer, but it is a highly efficient unit and the launchpad for all attacks.

Another day in Croker, another day where refereeing decisions came under the spotlight. To be fair to Laois man Maurice Deegan, neither side can feel particularly hard done-by, as the decisions seemed to even themselves out, but there were a number of questionable calls all the same.

The disallowed goal for Alan Freeman was a case in point. It was difficult to see any foul, and even if there was, there was no way that Conor Gormley deserved a yellow for the 'offence'. The penalty in the second half was difficult to see on first viewing whether it was on the line, but again, was there even a foul in the first place?

Unfortunately for defenders, a forward going at serious pace seems to generally get the benefit of the doubt with any contact at all, as that incident only highlighted and perhaps Deegan was balancing things up after the first-half call that cost Mayo. 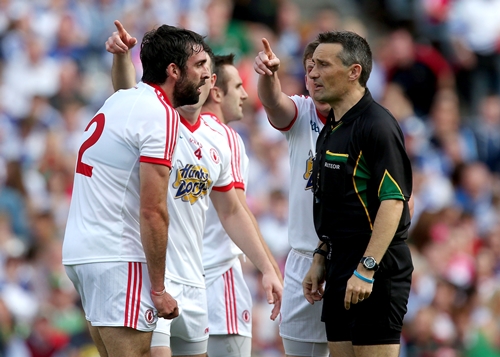 The Tyrone players plead with Maurice Deegan over the penalty decision

Deegan handed out cautions in some cases that seemed harsh, while others were let go unaccounted for.

Of course being the man in the middle is never an easy task, but the display by the officials was roundly criticised and we just hope that the second semi-final and decider will not be dominated by refereeing displays.