An honest Facebook advert? That's what happened when one Finnish translator was behind the keyboard for one company's dubious weight loss promises.

Tired of being told to gobble acai berries to lose weight? Tired of logging into Facebook and being bombarded with extremely suspicious health-related adverts? So was the Finnish translator for one weight loss firm that promises to turn you from flab to fab by using their product.

With a Special K model look-alike posing in a before and after photo in a red swimsuit, the translator's task was easy - just write two lines about how great the weight loss product was and how quickly it would change users lives.

Evidently tired of having to translate such nonsense, the translator instead wrote: "I've had enough. I don't feel like translating this shit anymore. Finns, don't buy this." An honest review on Facebook? That must be a first, though it was another great Tweet from the professional time-wasters at The Poke. 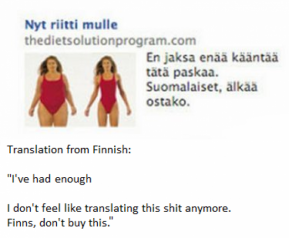 With over 51,000 followers, The Poke's tagline is "time well wasted" and its description of itself as offering "hand-picked internet gold" is pretty much spot on.

Be sure to give them a follow by visiting their page here to view their frequently unbeatable tweets.

popular
Morgan Freeman has been banned from entering Russia
The JOE Friday Pub Quiz: Week 295
Three people injured after two-car crash in Dublin
Late Late Viewers left in awe of Paul McGrath's memories of Jack Charlton
QUIZ: Get ready for a tricky time with this General Knowledge Quiz
The JOE Music Quiz: Week 105
Helen McCrory's children give heartbreaking tributes at her memorial service
You may also like
5 years ago
WATCH: This video showing 'hand-rolled ice cream' in Dublin is mesmerising
5 years ago
There's a new app that helps people find any food, drink or product they're looking for, locally
5 years ago
5 reasons why your business should 'pop-up' at one of Dublin's busiest stations
5 years ago
JOE BUSINESS: 3 great reasons you should pop-up in Dun Laoghaire this summer
6 years ago
This new app will help you keep track of the Luas strikes
6 years ago
TWEETS: Mixed reaction as Joan Burton steps down as leader of the Labour party
Next Page